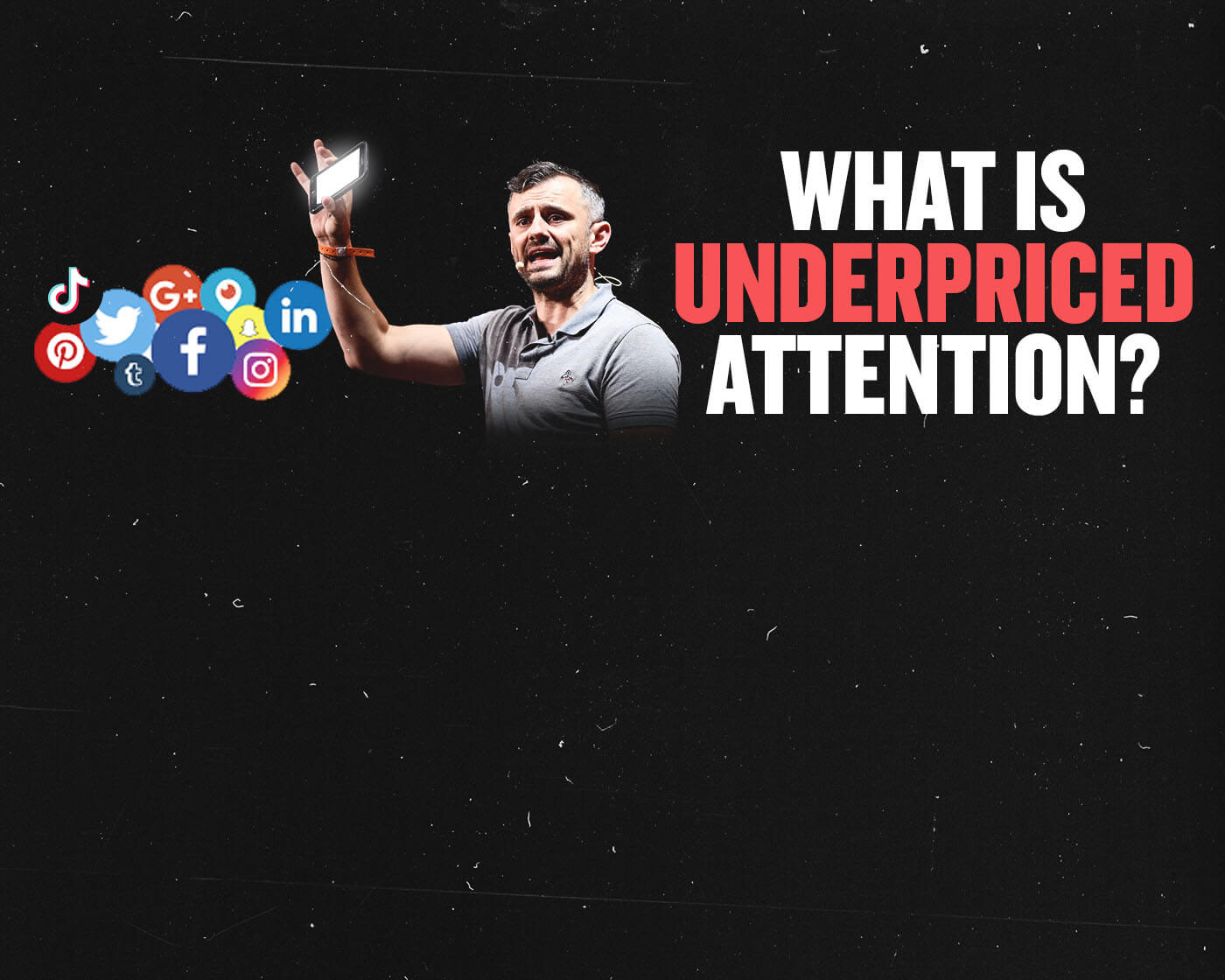 What Is Underpriced Attention?

Out of all the terms CEO and media magnate Gary Vaynerchuk has coined, underpriced attention may be the least understood.

Gary speaks about this all of the time, yet there are still different forms of media today that remain “underpriced” relative to the attention they could bring. Below, we’ll talk about what the term means, and how to think about harnessing the power of underpriced attention. It’s a handy guide for content creators, entrepreneurs, and anyone who wants to draw attention to a product, cause, or service.

We start with a conversation between Gary and A$AP Ferg.

What Is “Underpriced Attention“?

Underpriced attention lies in platforms and areas where most people who make advertising decisions don’t fully understand yet.

For example, here’s how Gary defined underpriced attention in this conversation with A$AP Ferg:

Gary: “If you took all 300 million Americans and asked them to sell bottled water, and they had a budget of one million dollars, how would they sell it? I believe 90 percent of Americans would make a TV commercial. Or do a billboard.”

In other words, TV commercials and billboards are very established advertising channels. Their advertising costs reflects that. It’s not that billboards and commercials “don’t work” – it’s that in many cases, they can be expensive relative to the amount of people that those channels reach.

Gary continues on how he would sell bottled water:

Gary: “What  would do with my money is give it to a bunch of influencers on Instagram. Then, I would make one or two great, 3 minute long videos for Facebook.”

What Gary means is that the ratio of advertising cost to consumption can be better with Instagram influencers. In other videos, he references other channels like Instagram stories, LinkedIn (given its organic reach), TikTok, targeted Facebook ads, YouTube pre-roll ads based on Google search queries, and more.

How Would You Utilize Underpriced Attention?

Although Gary previously observed that TV commercials are overpriced, he also considers Super Bowl commercials as underpriced–given the attention they attract.

Gary: “I think the Super Bowl commercial is the most underpriced ad in the world. If I had 25 million dollars to sell something, I would buy a Super Bowl ad first. Then, I would look at Facebook because [then] I’d have all of America’s attention. The sport of watching the commercial is real.

You can either watch [a commercial] on Youtube or you can watch it during the game.  Youtube’s new preroll based on people’s search is really interesting; it’s one thing to run a video of a sports highlight, it’s another thing to run a video in front of someone who searched for Knicks tickets last week. The search thing is fascinating now, I used to make fun of it.

Social Media Is So Crowded, How Would You Stand Out?

Gary: What I look for is pure intent and something that brings value in the moment.

It’s all about fundamentals: picking up the phone, DMing people, doing the research, anything to find out what’s valuable to the [people] you want to engage. Provide value (i.e. your time, [content]) to other influencers you want to collaborate with. You have to “business develop”.  Don’t make your content solely about what you’re trying to sell.

Also, how many pieces of content are you putting out everyday? The quantity of the content matters as well.  Figure out what brings value and provide it daily.

What should brands know as they advertise on new channels?

Gary: When you get to the distribution part, my friends, you have to respect the context of the platform. I’m watching so many people that are in B2Bs try to win on Instagram, but they’re acting like Instagram’s LinkedIn.

It doesn’t matter if you’re a lawyer, a financial advisor, or you sell concrete. If you treat Instagram like LinkedIn, even though your business is more [akin to] LinkedIn you will lose. You will lose if you do not respect the context.

What’s A Current App That Has Plenty Of Underpriced Attention?

As mentioned above, there’s a lot of opportunity to take advantage of underpriced attention on social platforms today. Gary talked about TikTok, LinkedIn, Instagram influencers, swipe ups, YouTube pre-roll ads, and Facebook ads for those who know how to leverage their targeting capabilities.

Here’s some insight into his thought process on the underpriced nature of Instagram influencers.

Gary: I can’t get over how underpriced attention on Instagram is. The conversion rates are like the Wild Wild West.

Here’s what I mean. Just because someone has 800 thousand Instagram followers and  another person has 40 thousand followers, and they both want $1,000 bucks [doesn’t mean the math is simple]. I’m surprised at how basic people are. They think the 800 thousand account is the better deal. I mean, I understand, it makes sense. The math seems pretty clear…but a good affiliate marketer will tell you, the conversion rates really matter.

If you’re trying to sell something, whether it’s a service or a product, I couldn’t push the culture of DMing influencers harder. Influencers that you think may represent your brand properly or have big audiences–start asking them what they want [in exchange for a] post about your B2B SaaS product, new app, or whatever it may be. Influencers are super underpriced and potentially super overpriced. Not allocating a couple hundred bucks or a couple thousand bucks…or ten thousand bucks (depending on the size of your businesses) into that funnel is a huge missed opportunity.

What Will You Do If Interest In A Particular Platform Declines?

Gary: Underpriced attention has predicated my career. That’s why I was first on YouTube. That’s why I was earliest on Twitter and Facebook. By the time I was in my thirties, I got smart. I started investing in the companies and not just using them.

The reason I run VaynerMedia is because I want to be in the dirt. When you’re in the dirt, you know what’s going on. If you’re in the clouds, you’re in an ivory tower and you do not. I stay in the dirt which allows me to deliver the tactical advice that built me. [The platform building on/through] emails, websites, Google Search, YouTube, Facebook, is 100% happening right now on LinkedIn and TikTok.

You could have no profile on any one of those accounts, and later write an article on LinkedIn. No more than four sentences or five sentences that brings value–not a commercial for your business–and by the time you wake up the next morning, complete strangers have now heard of you. Half of them agree with you. You intrigue one or two of them. I just don’t understand why people don’t make content.

I mean it, I’m not throwing around my cell number  for my health or ’cause I think it’s funny. I’m doing it because I believe that we’re in the early stages of social media’s macro decline and I want the first-party data of having my end user’s phone number so I can talk to them directly. I don’t like that I have 7,000,000 followers on Instagram, but when I hit post, a small fraction of those 7,000,000 people see it.

I’m not a crybaby that gets mad that the organic reach is down, because I’m very aware that it is free. I kept trying to remind everybody, it’s free. Instagram does not charge you, YouTube does not charge you. Television, print, radio, and outdoor billboards charge you. [Social Media] is free distribution.

This will be the next decade of communication warfare. We will separate as organizations and as people as the people that are the haves versus the have-nots. Many of you over the next decade will fire or restructure your businesses to bring in journalists, videographers, designers, cartoonists, animators. You will start slowly but surely understanding how true what I’m saying is.

This is going to be a communication warfare.You will also bring in math-oriented individuals that understand how to navigate organic and paid distribution in whatever the [current social media is]. Whether all [of today’s social media] are there or none of them are there, I could care less. In a weird way, I’d almost prefer it if every social network and content platform disappeared. Whereas everyone else would be stunned, my greatest skill is finding where the attention is. I believe that I could gather the most.

That’s all for now VaynerNation! If you enjoyed that article, be sure to share it on Twitter!