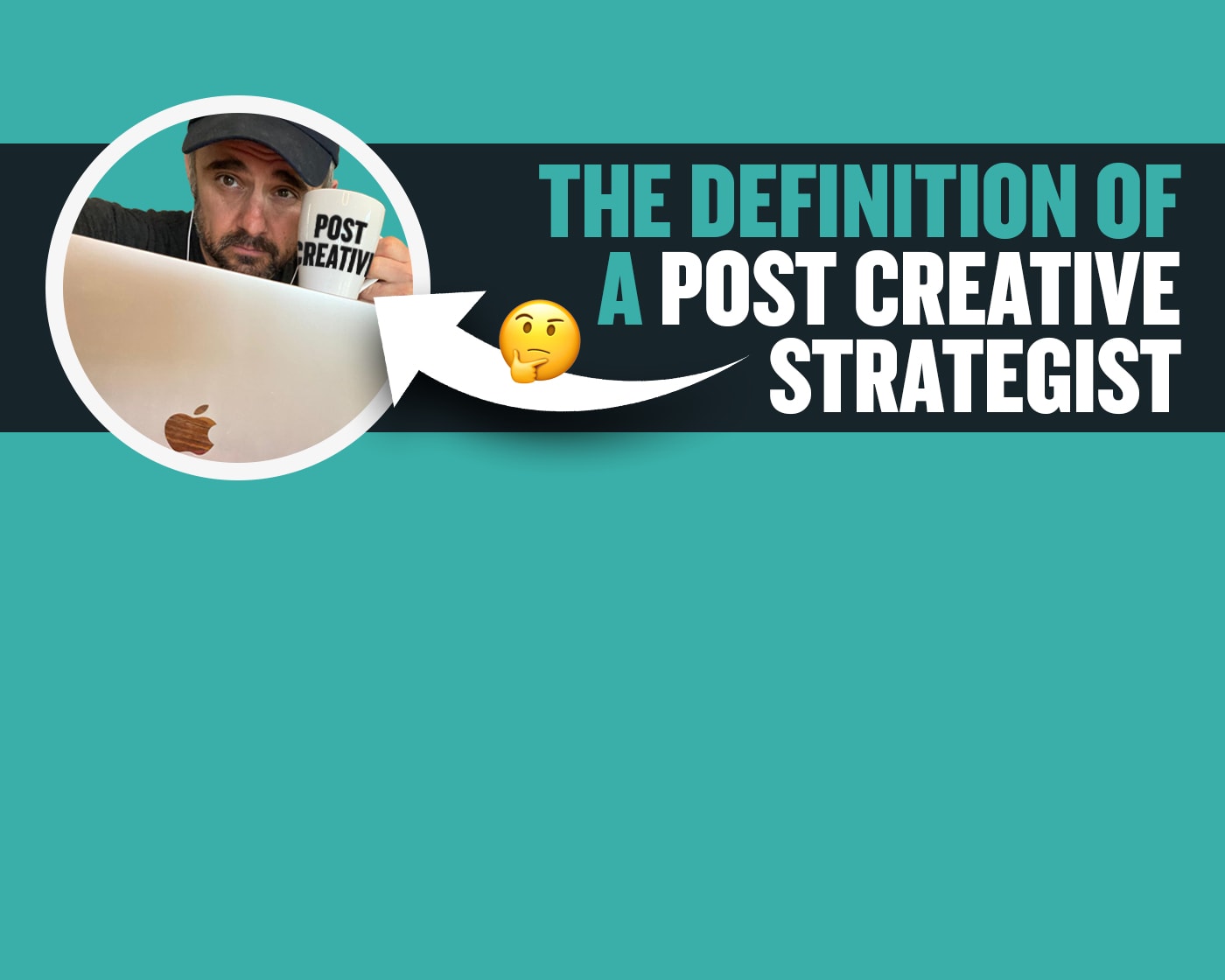 I don’t always make predictions, but I’m so excited to be at the forefront of what I perceive as a massive shift in the modern ad agency. I believe a “post creative strategist” is necessary for any brand that wants to curate and cultivate exceptional, on-brand content.

At VaynerMedia, we’re hoping to include a post creative strategist on our team; it’s an important position that’s been wildly overlooked.

How strategy typically works at an agency

If you look at how strategists run at creative agencies, specifically the advertising industry, these are individuals that do the work prior to the content going out to a client. A client gives you a budget and says, “Hey, we would like to win with, say, Black men in Atlanta; we’d like them to buy more of our soap. And we want to win with moms in California.”  Cool.

What ends up happening is, a strategist does research. She’ll conduct focus groups, go on the internet, look at data, come up with a hypothesis, and hand that hypothesis to a creative.

It’s the same process if they tell the strategist, “Hey I need to win big with frat boys in Alabama”, the strategist will go and do her thing.

Then, the strategist shares her research with the creatives, and the creatives make their interpretation of her hypothesis. Finally, the client has to make a subjective decision to post it.

First of all, that whole process takes a long time – could be about nine months. It takes about a month for the strategist, then they’ve got to sell it through to the decision makers for what it’s worth, and after that they go make it and produce it. That’s slow.

Plus, that’s really the old “commercial.” You would make a commercial then you would make matching luggage. Then, the creative team would give it to the digital team, and they would take still shots and little clips from exactly that same shot. Same color, same fonts. Being on brand. There’s risk there because it’s such a long process that really depends on the one piece of content working out.

The way I look at strategy is “volume.”

How would a post creative strategist disrupt that process?

So, rather than putting all that on the strategist, the creative, and the subjective opinion of the client (then betting the farm on it because you’ve spent a million dollars on the commercial) and hoping it works, utilize a post creative strategist.

For us, this post creative strategist is the most interesting role because it is still an “anthropologist”, it’s still an emotional intelligence focused “psychologist”. It’s still a curiosity finder. However, this individual is still living and breathing “day trading attention” more than “investing in a mutual fund.”

Meaning, they’re not going into a lab for a month and doing research, coming out and saying Ta Da and handing that research to the creative team. Instead, they’re living and breathing the research everyday just like the customer. Going with our earlier soap example, they might put out soap content for 15-20 different demographics and then see what people are saying & determine what works from there. It’s testing and learning.

What defines the role of a “post creative strategist”?

A post creative strategist’s role can be analytical, but a lot of times the media team and the analytics team are taking care of that. What I see it as is, is the skillset that in hindsight became the foundation of my career. In spite of all the talking that I do, and everything you see on the internet, what I’m doing 95 percent of my time is actually listening.

I was watching and replying to everything on Twitter. It led to a place where I would reply to the replies of my content. I would put out a piece of wine content, eleven people would reply, and I would respond to everything. Thus, it meant that I was reading everything. That led to understanding what people were interested in, reacted to, liked, or didn’t like. This led me to say something different next time based on that real time data and feedback.

That’s the seed in which the post creative strategist role is born.

What type of characteristics does a post creative strategist have?

A post creative strategist is practical, humble, and fast.

She or he or they must possess a talent for being able to see all of the comments from the (hopefully) 80 pieces of content per week. Someone who’s able to read all of those comments and understand that the comments on Twitter will be one way, and the comments on Instagram will be another way. The comments on LinkedIn will be another way–because the psychology, the audience, everything is different on each platform. The strategist will know how to throw out the edges (the things that don’t mean anything, the things that are probably just noise), and should be able to zero in on the commonality or the insight on the creative to then go back to inform the creative team.

The ability to say, “Hey, more flower videos” or “Hey, we need more optimism because people are anxious.”  They should be living and breathing content.

I often equate this to the kind of individuals who signed up to go out into nature and the wild and sit in jungles for 15 years, just watching, in order to deeply understand a red-headed ant or a chimpanzee. It’s watching people’s reactions to things and being good enough to understand when people are being keyboard warriors.

Just because nine people said you suck, that doesn’t mean you should stop. The talent of the post creative strategist is to know what’s a throwaway comment because people act tough on twitter but they act differently when they buy or support things. It’s a very interesting skill set that I believe is grounded in deep understanding of psychology and nature vs nurture. Humans behavior in the internet pontificating verus actually doing something about it.

It’s a very creative role because there’s a need for recommendation of what to make next. I even see it evolving into a place where it’s integrated, deeply, into the creative team where they have the ability to make a piece of creative right on the spot. Perhaps in written form if they don’t possess the video and design capabilities of their creative team.

The primary drive behind hiring a post creative strategist

I’d say the primary drive for hiring a post creative strategist is that it enhances creation’s strength the next time it comes out. It’s less about driving down time, it’s more about giving strategy to what should be made. Content will more likely hit if you have a great post creative strategist. What I’ve learned during the past five years of this is you have to be so good at ideas and that comes from this. Otherwise, you’re just sitting around saying, “what should we make?”

I think you can be an excellent post creative strategist at VaynerMedia if you understand human truths. Feed those truths to a team and understand the analytical impact. However, the creatives themselves have to get better at that themselves.

“If you were hiring someone for this kind of role, who would you look for?”

I would probably hire somebody like a psychology major that is scrappy, or somebody that has that “psychology” skill set of being able to get a feel for human reactions and feedback to content. The dream person for this role would actually be someone like me (I didn’t know I had similarities with a psych major back then, but I was scrappy).

Domain expertise people could also be fascinating. Journalists might also end up being a good fit for a role like this. A “301” salesperson also does what I’m talking about.

“Is it someone that has a pulse on different fields and industries? Someone who can understand different areas like environmentalism and hip hop?”

Those specifics are tough because that depends on the accounts (in the agency world). But you have to build a company that understands people on the coast, and moms in middle and rural America. A company that understands people who drive pickup trucks and take daily trips to Walmart. Every company needs someone who is good at that because things are so tense in the United States right now.

Much like micro influencers, much like community managers, I’m making a prediction (which I rarely do)–that this will be a staple of all agencies and all brands.

I’m excited to be at the forefront of this shift. I’m excited to find incredibly talented individuals. I’m excited to innovate and create a job that is actually the perfect job for hundreds of thousands of people, even though they don’t realize it yet.