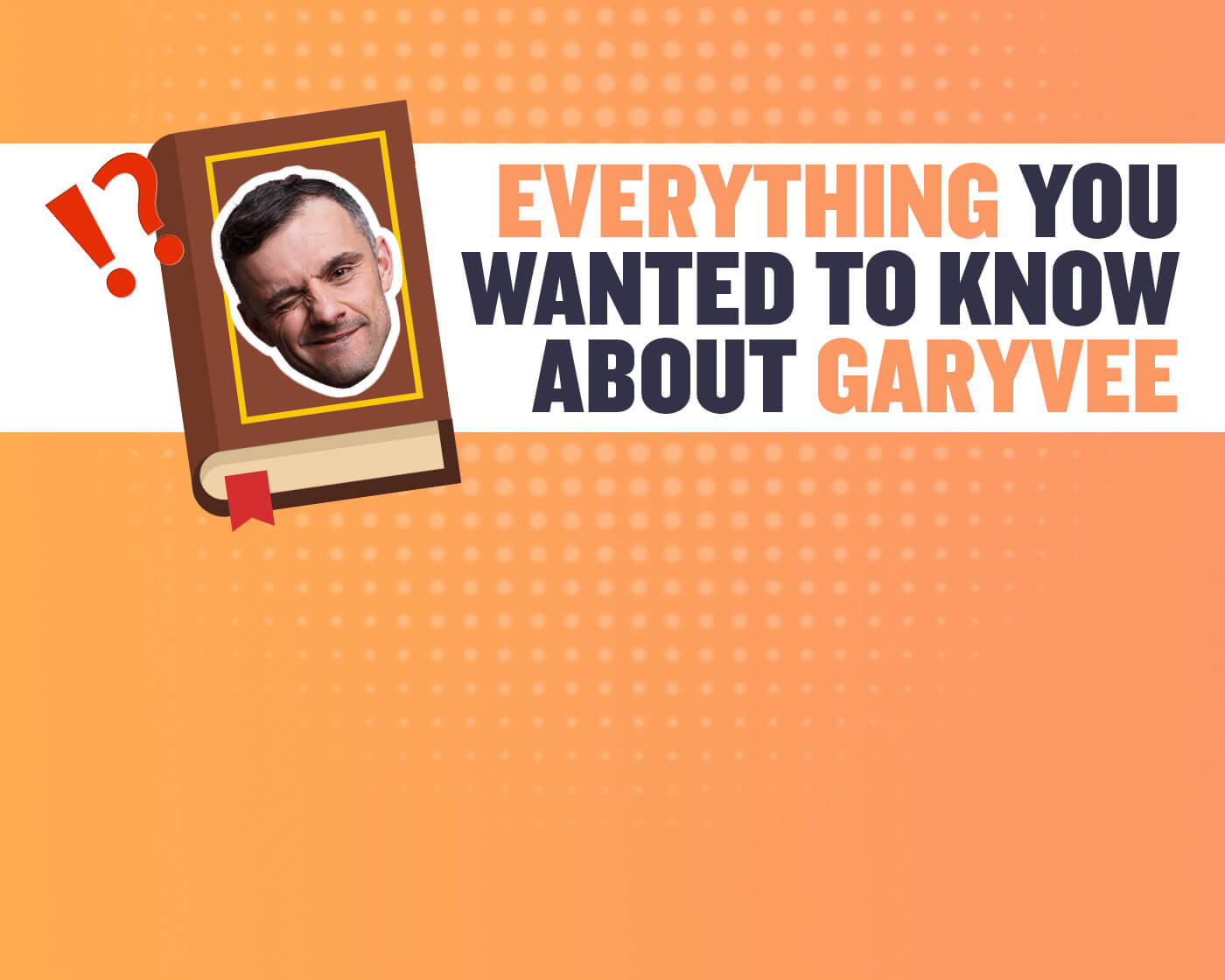 Everything You Wanted To Know About Gary Vaynerchuk

Over the past few years, we’ve seen a lot of common questions asked about Gary Vaynerchuk, CEO of VaynerMedia and Chairman of VaynerX. Where did he start his career? What does he do, day to day? Why does he produce so much content across social media? How does he make money?

Recently, the team uploaded a video titled 44 Years In 9 Minutes on YouTube. It’s an overview of his life, career, and how he got to where he is today.

Be sure to check it out if you want a more in-depth look at his life. If you’d like the Sparknotes version, i.e. rapid fire answers to your questions, keep reading!

“What Does GaryVee Do?”

Gary’s the CEO of VaynerMedia, Chairman of VaynerX, co-founder of VaynerSports, investor, and 5x New York Times bestselling author. Gary has invested in companies like Facebook, Snap, Venmo, and Twitter. Plus, he signs all our paychecks – that’s what he does.

He’s also involved in a variety of entrepreneurial ventures – including being a founding partner in Resy (acquired by American Express), Empathy Wines (acquired by Constellation Brands), and also released five sneakers in collaboration with K-Swiss.

“Where Did GaryVee Grow Up?”

“I was born in Belarus, the former Soviet Union. [My family and] I came here when I was three,” Gary recalled in an interview with Inc.

“We were ridiculously poor. I lived with nine family members in a studio apartment. My dad got a job as a stock boy in a liquor store. He eventually lived the American dream and saved all of his money. But, a funny thing happens when you don’t spend any money for four years. You actually accumulate it.  So, he used his savings to buy a small liquor store.”

Gary was a purebred entrepreneur from a young age. He sold baseball cards and ran lemonade stands during his time growing up in Edison, New Jersey.

“I had seven lemonade stands when I was six years old. When I was 12 years old, I really started learning entrepreneurship because I had already started a massive baseball card business. I was selling $1000 – $2000 worth of merchandise each weekend at the malls in New Jersey.”

In those early days, he learned a lot about business – lessons he still uses to this day. As he grew a little older, however, things changed.

“How Did GaryVee Start His Career?”

“So, my dad dragged me into the liquor store when I’m 14. Years later, in 1996, I launched one of the first wine centric e-commerce businesses in America.”

Gary started working his family business at a young age. After realizing that people collect wine in a similar way to baseball cards, Gary grew more passionate about the business and fell in love with it.

Over the next few years, he grew his father’s business from a $3 million dollar company to a $60 million enterprise.

“I didn’t inherit anything–I did work alongside my father, grow his business, and make a salary,” he says.

After growing his dad’s business from $3 million to $60 million, Gary eventually left the company with no equity and no ownership, starting over in his 30s in a different industry to build VaynerMedia.

“People think I got something handed, it’s actually the reverse. I gave up … 13 years of my life to build my dad’s business for him and left with nothing,” says Gary. Like a lot of immigrant entrepreneurial families, Gary felt a responsibility within himself to pay back his parents for what they did for him.

The transition from Wine Library to full time CEO at VaynerMedia was not quick. Gary spent a significant portion of his young adulthood working for his father and honing his skill set.

“When Did GaryVee Create VaynerMedia?”

“I started VaynerMedia in the conference room of Buddy Media’s company because I had no money to pay for our own rent.”

When Gary started the company, VaynerMedia was a “community management shop.” Over time, his vision was to create a communications “Death Star” with capabilities across the board.

“What Does VaynerMedia Do?”

“We understand where the attention is and produce creative that is contextual to each social platform,” says Gary.

“Where Does GaryVee’s Money Come From?”

Gary’s goal is to be the greatest entrepreneur of all time. That means two things: 1) Building huge businesses (like VaynerMedia, Empathy Wines, etc), and 2) giving back to the community.

“Like there are so many people who are going to be unhappy making a million a year who would’ve been thrilled making [less],” says Gary. “People say things like ‘I’d rather cry in my Ferrari,’ people say that when they don’t know what crying is. I’d rather be happy as fuck taking the bus.”

Through his personal accounts on social, Gary focuses on the second point above – giving back to the community. It’s why Gary & the team put out so much free content like a 270-page deck on making content, do live stream Q&As,

“Is GaryVee for real?”

“I’m a business operator, but I think my personality and my extrovertedness and my bravado on stage in content definitely creates confusion. But the thing I’m most proud of is that I’m ‘legit’, if you’re talking about being a business operator, being somebody who’s invested wisely and been right about the future, and being kind,” says Gary.

“The closer you are to me and the more you know my truth, the more “legit” you’d think I am. The more 1-minute videos you watch on Instagram or YouTube, the more cynicism and confusion you might have about what I stand for.”

“How Do I Get In Touch With GaryVee?”

If you’re reading this, you probably already know how active Gary is on social media. We encourage everyone to join his texting platform by texting 212-931-5731. If you’re International (or can’t text), hit Gary up on Twitter.

“At the end of the day, I want to be remembered for giving more than what I took from the world.” – Gary Vaynerchuk