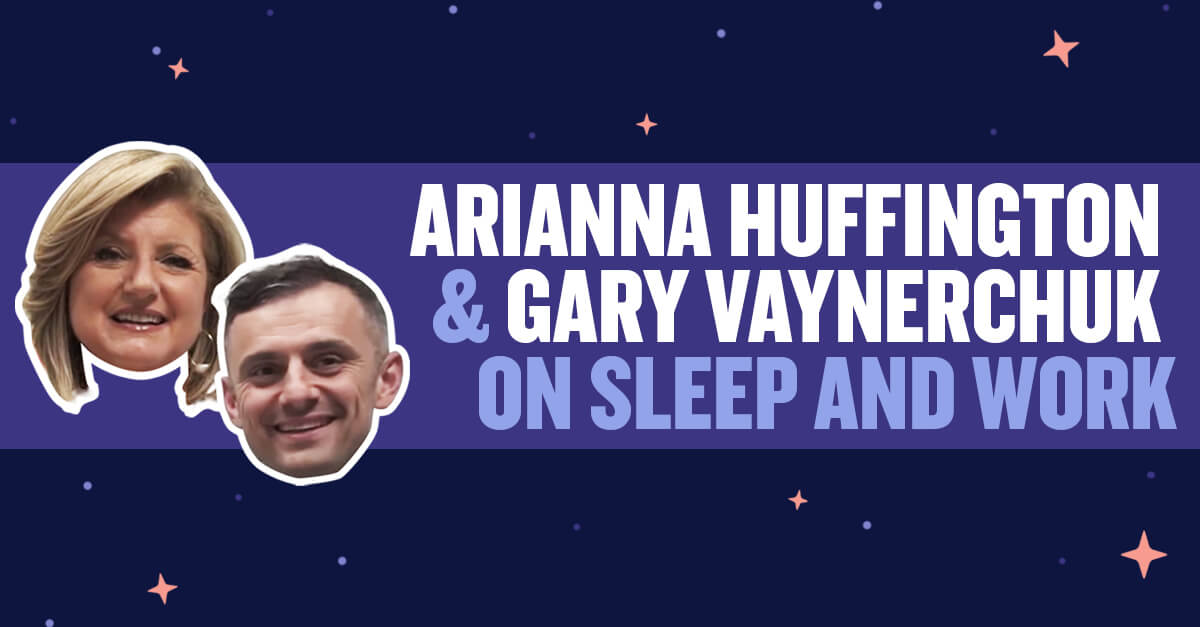 Arianna Huffington and Gary Vaynerchuk on Sleep and Work

In today’s modern society, your wellness should be on the forefront of your mind. However, in the lives of many, the importance of wellness often takes a backseat to success and financial gain. With everything that’s been going on in the United States and abroad, it can be easy to neglect your mental health and physical well being. For that reason, we revisit a conversation between Gary Vaynerchuk and Arianna Huffington — two mavericks in their respective media niches — about how they think about wellness.

Gary: Arianna, for the four people who don’t know, can you describe who you are?

Arianna: I’m Arianna Huffington and I was not born in this country, I was born in Greece. I’m an immigrant, a naturalized immigrant (whatever that may mean). In 2005, I launched the Huffington Post with Kenny Lerer. I have two daughters and I have written 15 books.

Arianna: You have plenty of time to catch up.

Arianna: I had collapsed from sleep deprivation and burnout; I hit my head on the way down from my desk. It [was] a terrible wake-up call. I broke my cheekbone and [I woke up] in a pool of blood, asking myself: is this really what success looks like? Not just I, but millions of people have bought into this collective delusion.

Gary: People know I work a lot. [However], I say this often: I’m a huge believer in sleep. I always [talk] about hustling 18 hours a day, and [working] those kinds of crazy numbers, but boy, I am all in on sleep. It’s just math; you need to sleep. In the same way, I started taking care of my health a couple of years ago.

Arianna:  Eight hours each night, 95 percent of the time.

Gary: I think, people think, four or five hours. [But], I’m rarely five. I sleep mainly six, sometimes seven, hours. It’s [harder] when I travel,  [but] I’m a much bigger fan of sleep [than] I think than people realize.

Arianna: Try to take a nap [whenever possible]. It will make you more productive [because naps] reset your system.

Arianna: [Yes], we need a transition to sleep. If anybody has children you know that you don’t just drop your baby and your young child to bed. You give her a bath, you put her in PJs, you sing her a lullaby….modern men and women have dropped the transition.

The transition is: you are texting, emailing. You put your phone by your bed and you turn off the light. Then, what happens is that you may be exhausted enough to go to sleep but your brain has not been given the opportunity to wind down. So, it’s going to wake you up in the middle of the night with all this innate chatter that is completely and utterly unproductive.

Gary:  If you wake up fully recharged, it means you wake up ready to take on the world. You know that feeling? You wake up and say, “Come on, bring it on.” It won’t matter how many obstacles, challenges, or setbacks [you encounter].

So, get your sleep in, but don’t watch four hours of “House of Cards”, or play Candy Crush for an hour, or play video games for six hours if you want to build a business. I’m not [talking] about how much you sleep, I’m [talking] about what you do when you’re awake.

Arianna: Hard work is not the problem. We’re talking about being your most efficient, best self when you show up to work.

Arianna:  You’re not going to be much use to your children, your patients, or anybody if you let yourself burn out. Nobody should be able to reach you at all hours, unless you have what I have. [I have] a dumb phone that has no data. [It’s] for my daughters and for an overnight news editor [to contact me] if there is a crisis. My regular phone is outside my bedroom [when I sleep].

Gary: The same thing for me. I have [my emergency phone] by my bed but it is completely silent. It never wakes me up.

If you liked this article, it would mean a lot to us if you shared it on Twitter!