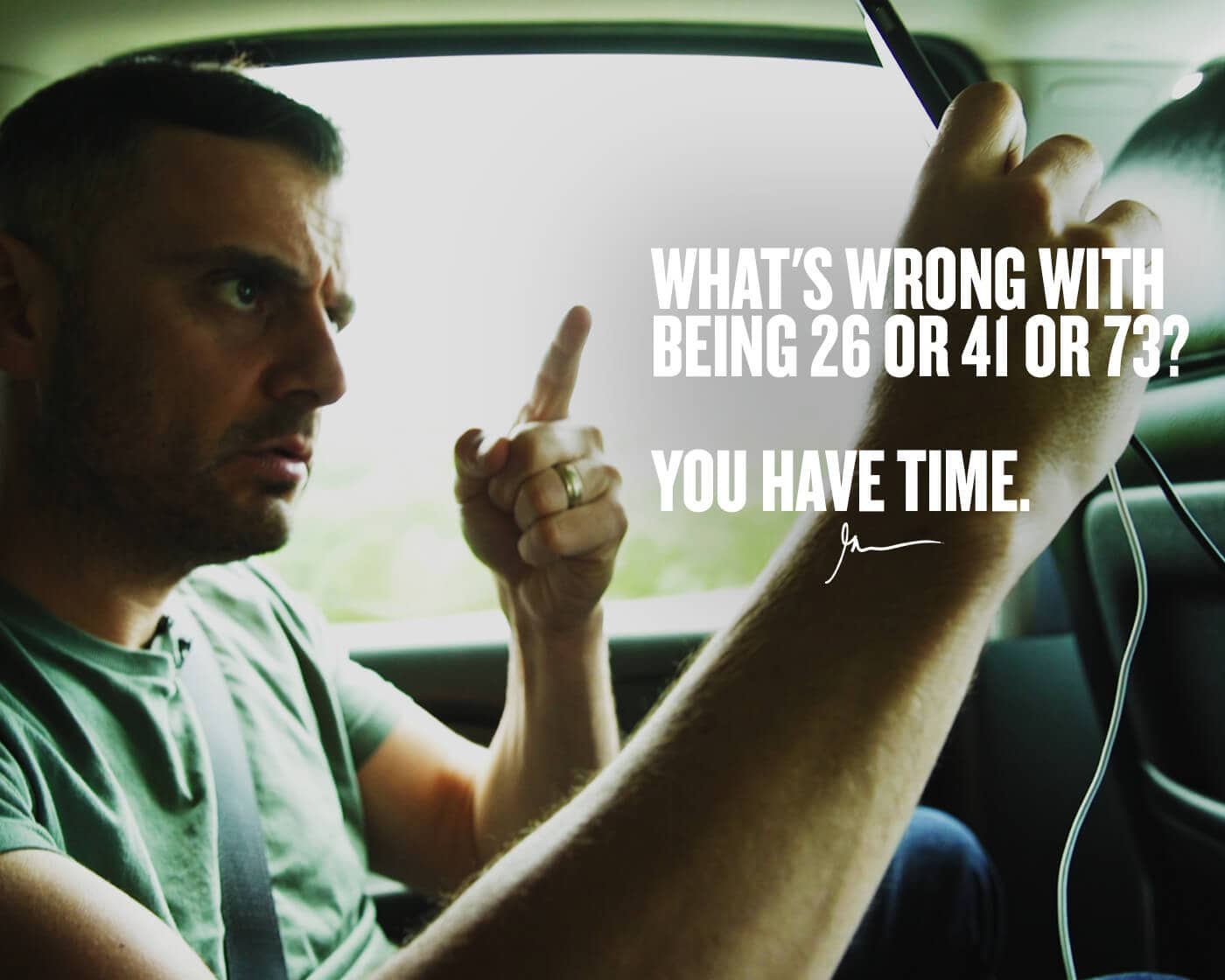 All You Have is TIME

That is how old Sam Walton was when he started building Walmart, and NOW I have to hear all of you fuck faces tell me that you don’t have time, and it’s over, and you missed your moment, and all this bullshit because you’re 28 and you feel like you’ve taken a secure job and have given up on your dreams. I’m just completely blown away by people’s lack of understanding. Look at what’s going on with me right now. At 31 years old, I was a wine merchant in New Jersey, going to the store every single day, buying and selling wine. That was my life.

I’m just completely confused by people’s lack of ability to understand that you still have time.

I’m blown away by people’s lack of understanding of how long life is; how long the game is. This is a serious rant for the two groups of people who need it right now. 54-year old, Charlie who’s like, “I’m 54, it’s over.”

NO you’re not, because you have 30 more years of life. You can do it. Sidney Frank created Grey Goose at 72 years old. 72. I know there is Colonel Sanders, and there’s all sorts of other names but I wanted to tell you about Walmart because it’s the biggest. The guy who created Walmart started it at 44 years old.

How old are you??

I mean you could literally suck shit for the next 18 years, do nothing, NOTHING, and then start the thing that puts you on the map. I just really want everybody reading right now to understand the world we live in. The other group of people are the 24, 25, 26 year olds who now are a year or two, or three, or four into their career, and for some reason they have decided that’s it. It’s insane to me.

A couple of days ago, McGregor and Mayweather announced their fight, right? There’s this mean picture of McGregor going around right now, where it’s a picture of him right now and it’s a picture of him four, five, six, seven years ago. The picture on the left is of him going to pick up a welfare check for 300 dollars, and the photo of him today is, he’s going to make a hundred million dollars for one fight.

The game is LONG. There’s so much opportunity. Optimism is the secret to capitalizing on this opportunity and that’s where you need to live.

You need to figure out how good it really is and how much opportunity you have.

Most of all, how much time you have. I know, one of you is going to hit me up on Twitter and be like “What if I die tomorrow?” Then you die tomorrow.

The thought of factoring in the most extreme outcomes doesn’t matter… I love that you’re so good at excuses that the reason you’ve decided not to start is because a tree may fall on your fucking head tomorrow.

Anyway, you’ve really got time. But you’ve got to do the tried and true thing. When you realize you have it, then all of the sudden you begin to buy into patience. I’ve been pushing patience like it’s crack for the last three years. I’ve just realized why, I’m not even kidding. Patience is practical.

Listen, I hope that while you’re reading this right now, on Facebook or Medium or my website that you realize I’m right. That I’m just right. If you read this and it didn’t have my brand behind it, it’d still be just as true.

All you have is time.