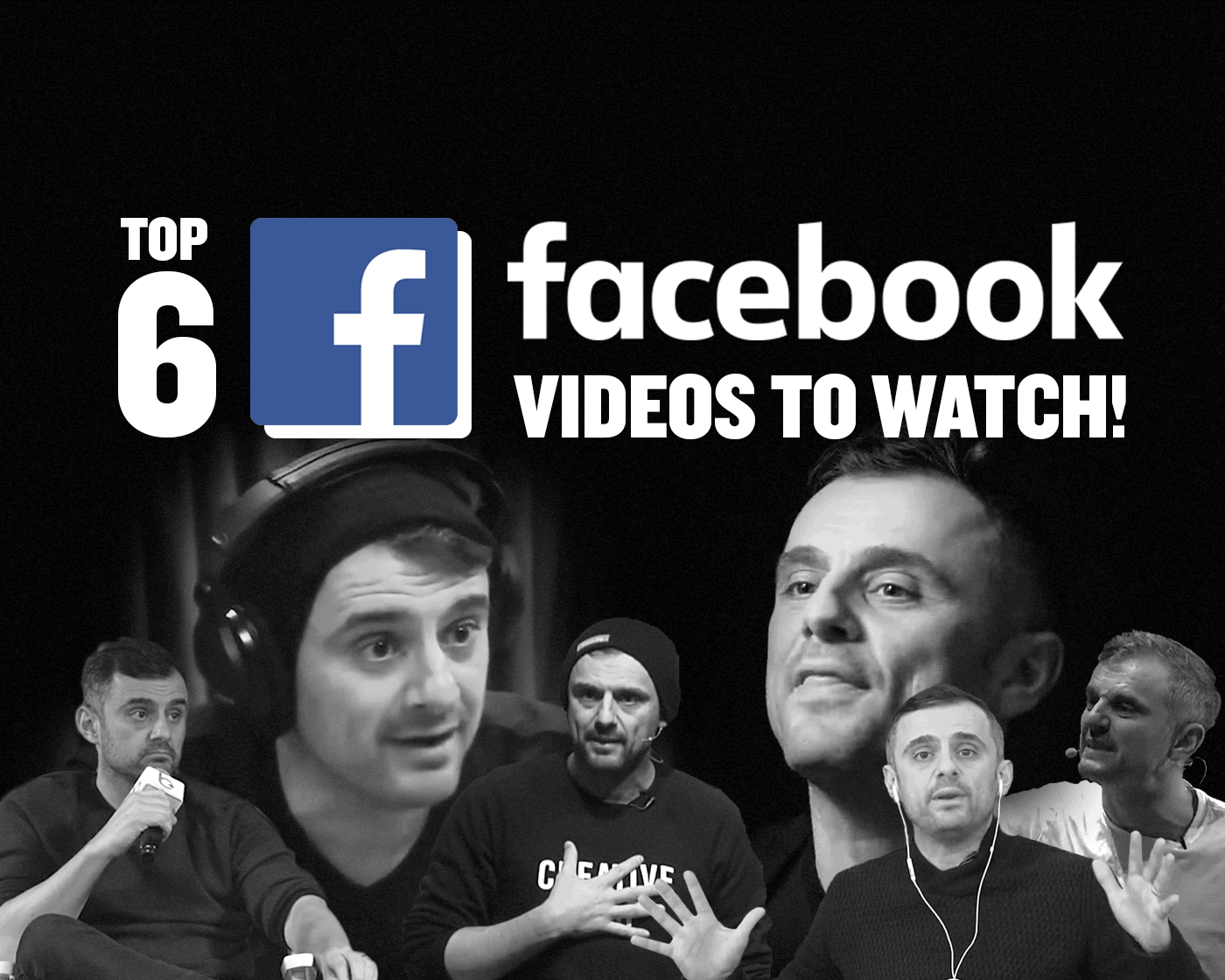 The 6 Videos You Need to Start Your New Year | #Veecap

Here’s a perfect way to start your New Year!

Entering 2018 gave me the time to reflect on what worked and what didn’t regarding my content from last year. Whether you have seen these videos before or are just encountering me for the first time 😉 here are the 6 most “popular” pieces of content that the VaynerNation resonated with on Facebook in 2017.

I compiled them all and recently released them as an episode of DailyVee, my daily vlog that releases on Facebook and YouTube at 12pm EST.

#1 What do you want to do everyday for the rest of your life? DO THAT

This one is simple. If you get to do what you love. You’ve won.

I know tens of thousands of people and I know thousands of people extremely well. I know hundreds of people deeply well. There is no correlation between how much money someone makes and their level of happiness. I have friends who make $47,000 a year and are the happiest people I know. Their work-life balance is on point. They’re part of two soccer teams. They play video games. They watch every show they want. They take two vacations that they scrap together and they’re freaking happy as hell. I know tons of people who I grew up with in the Silicon Valley boom who have hundreds of millions of dollars in their bank account and are as miserable and as lonely and as broken as you’ll ever see. I implore all of you in 2018 to please reverse engineer and figure out who you are and figure out what level of monetizing and stuff you need and what level of creativity you need! Do this, and you will win.

What do you want to do everyday for the rest of your life? DO THAT

#2 Saving Cash to Go on The Offense

When I was a young kid, I made a lot of money selling baseball cards and comic books and toys. Then I started working for my dad’s business and from when I was 22 to 28, I was making $35,000 to $55,000 a year, but I had no expenses. I didn’t go on vacations. I didn’t buy fancy things. I saved my money, I saved my money, I saved my money. I didn’t have millions. By the time I was 33, 34, when I had that opportunity, I had still not bought a home. I was still in an apartment. I was 33 years old and I was renting because I was saving cash to go on the offense.

When I had a chance to invest in those companies, I put hundreds of thousands of dollars, not millions, but those hundreds of thousands made millions. Made tens of millions. That’s it. I didn’t have any crazy advantage. There’s a lot of people that make $55,000 a year when they’re 23. The problem is they go to Coachella and they want to buy a watch and they want to buy a BMW. I didn’t. I ate shit for 13 years and then I had a moment and I struck.

It’s practical advice that some of you need.

Saving Cash to Go on the Offense

Saving cash to go on the offense 💸💸

#3 What Should People Do

This was from my podcast interview with Joe Rogan.

And my advice was simple. People should fucking stop complaining.

People should figure out who the fuck they are.

People should not listen to America propaganda of fixing the shit they suck at. They should be tripling down at what they’re good at. They should be competent in certain areas, but you’re not going to become Beyonce if you don’t have the innate ability. You’re not going to solve everything. Your IQ can get a little bit better, but don’t worry about the incremental. Figure out what fucking puts you on fire and what you’re halfway decent at. If you’re lucky enough right now to be reading this and you’re good at what you like, become tunnel fucking vision because there’s way too many voices telling you what and how it has to be done.

You have to have the conversation with the person that’s holding you back. The reason most people who are reading right now are not doing the thing they want is they’re worried about the opinion of somebody. Usually their mother. Usually their father. The reality is is that your spouse may be the person holding you back and you have to have that conversation.

We have to get to a place where you’re doing you because the number one thing that scares the fuck out of me is regret. You’re going to sit there at 72 and you’re going to say, “I wish, I wish, I wish.” Whether that’s money or spending more time with your family, there’s a million ways to do this. Not everybody wants to buy the New YorkJets like me. Not everybody wants to smoke weed on the beach in the Bahamas. Everybody’s got a different fucking thing. Figure out what your thing is and stop making bullshit excuses like who the president is, or that your mom did this, or that “I” missed it. “I had that idea for Uber.” Then why didn’t you fucking do it?

What Should People Do? Gary on the Joe Rogan Experience Podcast

Forget the 💰💰. forget the fame , forget the stuff ⌚🚙🎁🏘 … it's the FREEDOM YOU TASTE everyday when you can actually do what you want to do and enjoy it and it's practical and viable … besides health it's the #1 thing I wish for you ❤ enjoy your Friday

#4 My Fire Side Chat With Daymond John

Anyone that thinks the President of the United States, whether it’s Barack or Donald or Bernie or Hillary, is going to help them, is in for an unpleasant surprise. Straight up. As the culture in which we communicate, work and create continues to change, here is the punchline. The market is the market. You either adjust or lose.

When asked how do truck drivers deal with self-driving cars or taxi cabs deal with Uber … Here was my response. It’s the brutal truth about innovation.

You can watch the full talk here.

This clip from my fireside chat with Daymond John highlights the biggest flaw I see in my community .. People spend way too much energy on what they CAN'T CONTROL … Guys, enough hoping and wishing and pondering .. Lets focus on things we can control and that REALLY MATTER

400 trillion to one. Those are the odds of becoming a human being. Now realizing that, I have to live my life every day on the internet, in my inbox, through the streets, of people complaining. What the fuck are you complaining about when you’ve only got one life? You are more likely to win the lotto 10 times in your life than actually having one. Can we please make this video the moment when you decide to stop dwelling and stop crying? Don’t tell me how you blew your knee out in high school. Don’t tell me that your dad was an alcoholic. It is time to take control. What are you going to see sitting at 80, 90 years old in a retirement home, regretting all the things you didn’t do? Please. Take life by the throat before it takes your throat and go out and execute.

Everything that happened has happened. No more dwelling. No more complaining. The only people that are listening to you are your other loser friends. Wrap your head around this ridiculous gift that you were given. It’s called life. You’re using your fucking eyes to read this or watch this and your ears to listen. Go step out and do your thing. The one thing you’ve always wanted to do or the 10, 50, 100 things you’ve always tried to do because the only thing that’s holding you back is the other people that are judging you. Who gives a fuck about them?

One fucking life – please wrap your head around this amazing gift you've been given!!!!!!!!

#6 Fuck Up On Purpose

I swear I’m obsessed with losing. I fucking love losing. I love losing because I know exactly what you’re thinking about my loss and I can’t wait to stick it in your face when I come back. I remember once my grandma said I was lazy because after seven hours of fucking dragging wood in my parents’ backyard, I was like, “I need a break.” She’s an old school Russian gangster. I remember laying there and her drilling me and me thinking to myself, “I’m going to stick it to you, grandma!”, because I like losing. When the Yankees and Rangers won their championships, I stopped rooting for them. People laugh at me like, “You’re a Jets fan?” I love being a Jets fan. I would hate being a Seahawks fan because you won. It’s over. The climb is over.

What are you fearful of? Your sister making fun of you because she’s got a better job? Fuck her. That’s my answer. You can be winning 28-nothing at halftime and still lose. Your older sibling that’s got a great fucking job could be a crack head next year. Seriously, who gives a shit if you’re losing when you’re in college? You’ve got 80 fucking years to stick it to them.

I’d recommend fucking up on purpose. I’m being serious. It’s so much better to eliminate expectations from the get. If you’re scared of other people’s opinion, fuck up on purpose. Then everybody thinks you suck shit. Then it’s all upside. Then you can go on the offense and actually win.

Why You Should Fuck Up

Why I am obsessed with losing, why I am winning, and why I employ you all to be okay with fucking up…

There is a lottt more coming in 2018 and I am so hungry to bring more value to my community and the game.
–
So excited to continue to work hard and smart and most of all passionately towards seeing through the talent and blessings I was granted.
–
Wishing you all the best year!

Thanks for reading ❤️