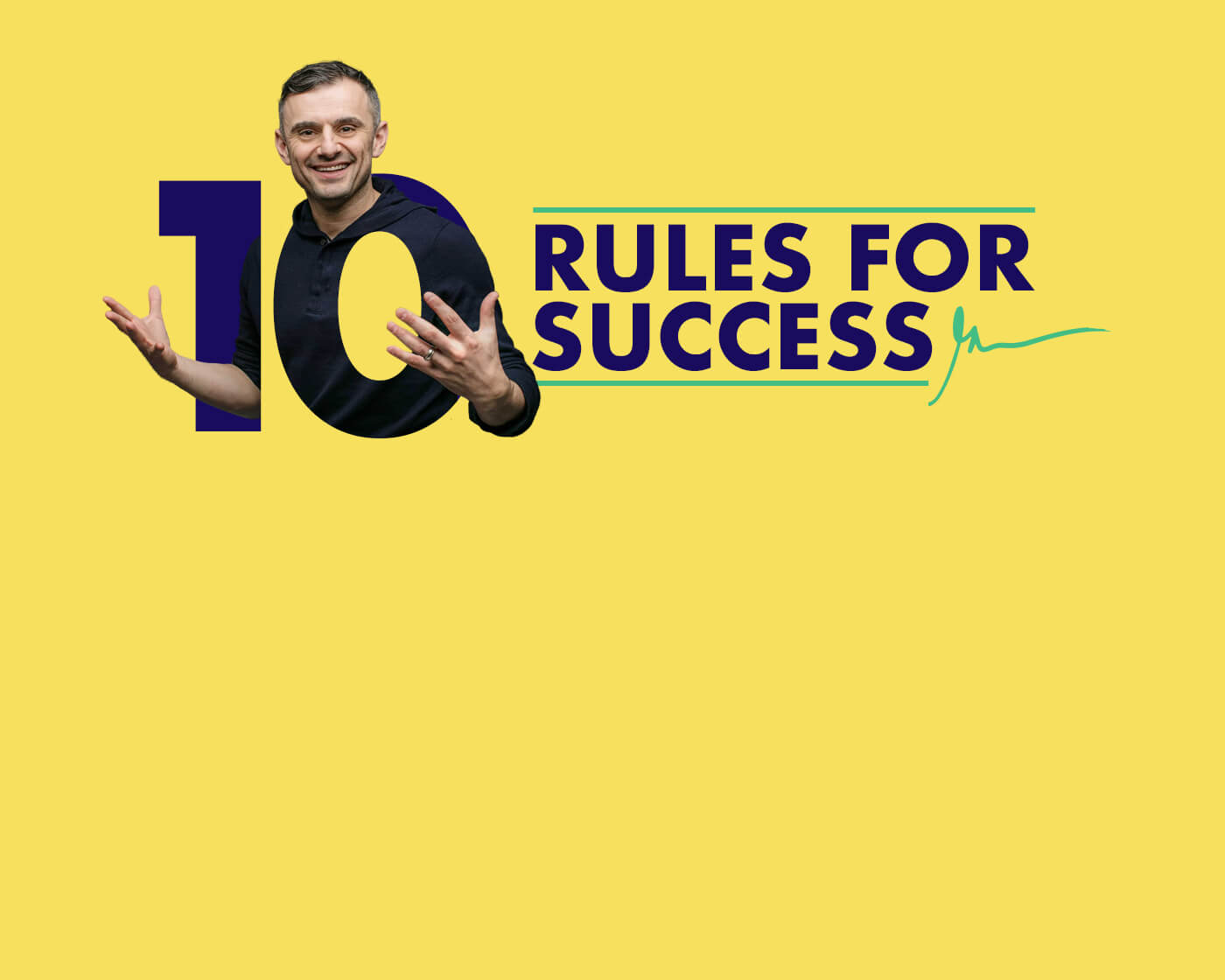 10 Mental Shifts for Success in Business

Self awareness the biggest keys to my success.

There are SO many people out there who are working jobs they hate because they haven’t found their passion.

It’s why so many people struggle with working 18 hours a day. If you don’t love what you do, of course it’s going to be hard to put in work. It’s hard to spend time doing something you’re not excited about.

One way you can do this is by asking the five people that you know best.

You can split them into two categories: People who you deeply love, and people who you’re close with.

Then, ask them to tell you what they think about your skills, abilities, and weaknesses.

I genuinely believe that collecting data from the “market” after creating an atmosphere where people can be safe with you. For example, someone might not want to be totally honest with you because they’re afraid it’ll hurt your feelings.

But you need that honesty to find out what you’re good at.

Everything starts with yourself. If you’re self aware, you’ll know exactly how to navigate your life.

Look yourself in the mirror, and ask yourself: “What do I want to do every day for the rest of my life?”

So many people are struggling with the thought of monetizing their passion. But no matter what it is, I promise that can find a way to monetize.

Doesn’t matter if you love the Smurfs,  Spongebob, Elf, or anything else. 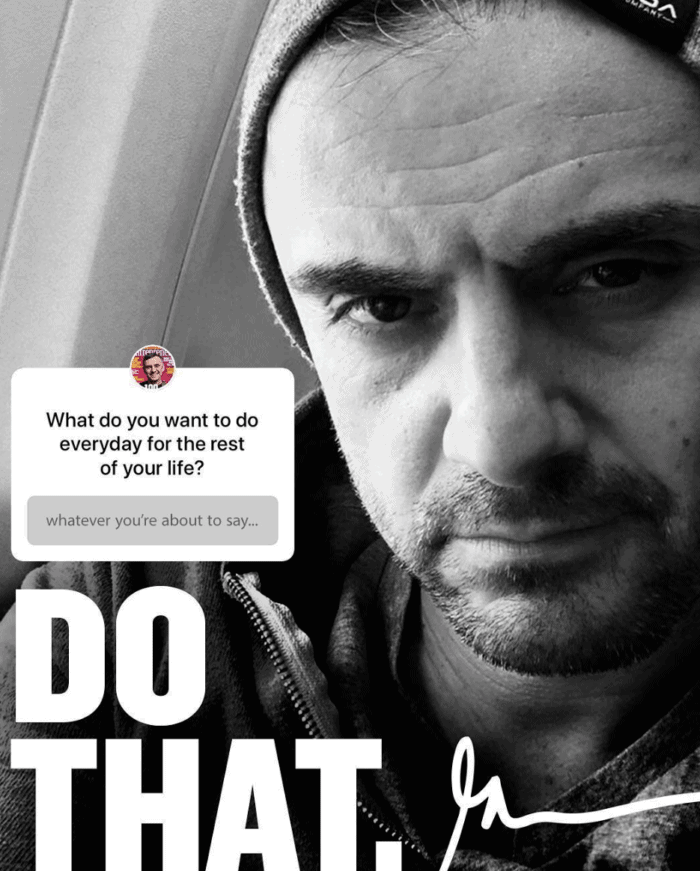 To be great, I think you have to fight.

My dad came to the US with no language skills and zero dollars. We lived in a studio apartment the size of his office with multiple family members. He got a stock job for 2 bucks an hour in New Jersey, learned English, saved all his money, worked 18 hours a day, bought a store, had a business, and did all this in a 5-year period with no base.

I very much think that my success as a product is in large part because I’m willing to outwork people. The fact that I’ve been working 19 hours a day every day for the last 20 years is easy for me.

Let’s say I played Roger Federer right now in tennis. Let’s say I had the greatest tennis racket ever made, and he had a John McEnroe 1974 tennis racket. He could still beat me — just like I’m beating salespeople that have every salesforce, every tool, every feature, and went to every sales conference.

I’ll beat them every day of the week because I have talent, and I’ve worked to hone my craft.

Stay humble and work hard on your craft, and you’ll see some great things happen.

4. Don’t dwell on mistakes (everyone else is already doing that for you)

People love to ask me about mistakes I’ve made in the past.

The truth is, I’ve always struggled in answering that question.

It’s not that I get nothing wrong. I get many things wrong.

For example, I was a breakout YouTube star in 2006. Then, I decided that the right strategy was to leave YouTube completely and go to Viddler because Viddler offered me equity in their company. Even though the attention was on YouTube, I moved over to Viddler because I was tempted by short term economics.

I could’ve had millions of more subscribers than I do now on YouTube if I had just stayed the course.

Here’s another one: I passed on investing in Uber twice in the angel round.

Even though the founder Travis Kalanick is one of my best friends, I passed on investing. And that mistake cost me hundreds of millions of dollars.

So I make mistakes all the time.

I’m adjusting my strategy at VaynerMedia everyday because of a mistake I made the prior year.

It’s just that I can’t recall my mistakes once they happen.’

If you’re judging yourself for your own mistakes you’ve already lost.

What a lot of people don’t understand is, accountability sits very close to happiness.

When you blaming someone else, you feel like you’re not in control. You feel helpless, like there’s nothing you can do about your situation.

It’s why I blame myself for everything. I think everything is my fault.

So many of you are pointing fingers at other people — your parents, your environment, your teachers, or where you grew up.

Of course, there are a lot of bad things that can happen to people. People get abused, people get killed, that’s real.

Blame everything on yourself, and you’ll be stunned how happy you become. 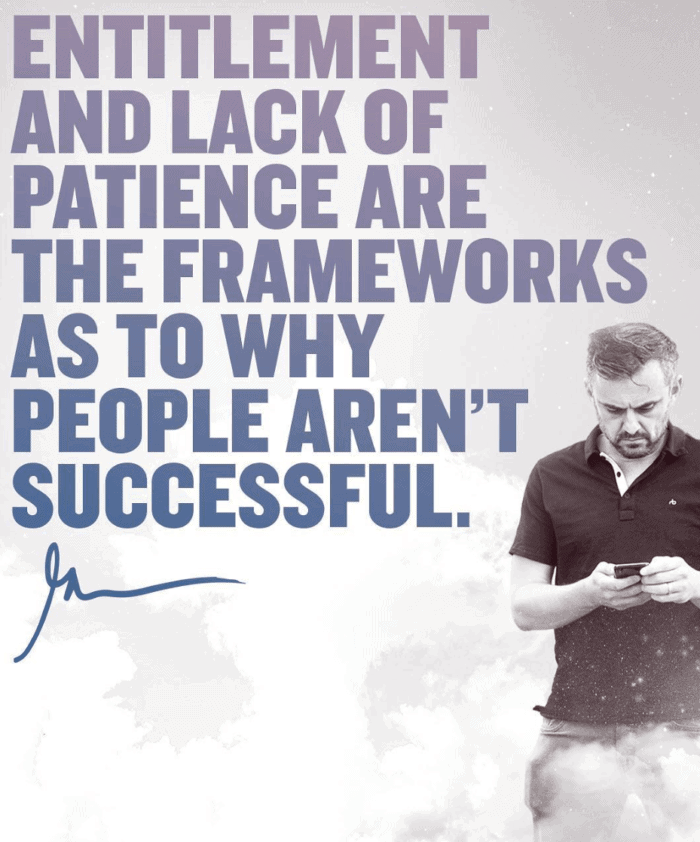 What I told you this was the last day of your life? What if I told you you’d die this week?

Would you complain about your crap job or that test you don’t want to take?

I doubt it. You’d go much higher level thinking.

Look… don’t get me wrong. I respect practicality.

You got to go through school because your parents want to. You’ve got to pay your rent. You got student loans. I get it.

But think about it: it’s incredible that you’re even alive. Your mom and dad could have had sex a couple of minutes later, and you wouldn’t even exist. You could’ve ended up as a tree, or a bird.

And not just that… we’re living in a world where there’s SO much more opportunity for us than there was for our parents or grandparents. The internet completely changed the game for everyone.

I just don’t get the mentality of complaining on Monday morning, or living for the weekends.

If you’re reading this, I implore you to take a step back and think about how awesome life actually is. Recognize that you can attack the world in a totally different way because you were lucky enough to be born during this era.

It’s unbelievable how good we actually have it.

So many people get caught up in day-to-day headaches, but in the macro, almost none of those things matter.

There are so many people in the world who have it much worse. There are people who have to live through the death of their children. There are people living in areas where there’s massive genocide going on. People out there are being persecuted and killed.

We don’t have real problems.

To me, nothing stands close to the health and well being of my family. That’s why it’s easy for me to be happy.

We’re very strong. We’re just being sold that we’re not. There’s just a lot of money in telling us that we’re not rich enough, pretty enough, or good enough.

I’m here to tell you that you’re the best. Go do sh*t.

Most people are “headline readers.”

It’s especially true when it comes to social media. Most people out there are just reading headlines instead of going deep and really understanding each platform.

It’s why so many people have opinions when it comes to running ads on Facebook or Instagram, even though they’ve never actually tried running ads on those platforms.

Headline readers don’t think that B2B is happening on Facebook. Practitioners are exploiting it and making real money.

Headline readers think that you have to make short videos on social media. Practitioners are making 20, 30, 40 minute videos telling their story, and re-marketing to the people who want in.

The most important think you can do in life is be a practitioner. The ones who do will see disproportionate returns.

8. It’s better to be fast than to be perfect.

Working faster is something that I don’t think people talk about enough.

At one point, I was debating with my Chief of Staff, Tyler, why I have three hours of down time in Boise, Idaho. We spent time deciding whether I should squeeze that into 15-minute phone call or fly back to NYC.

On a daily basis, I’m scrutinizing my 12 to 15 hour days, down to the second. I’m trying to fill in as much smart work into that bucket as possible.

Train yourself to do a little bit more in each hour than you normally would. Every day, add something. And get it all done.

Maybe that means scheduling non-negotiable time for a project if it’s that important. Maybe you need to work more odd hours.

In time, you’ll see that you’re doing much more in a day because you’re moving faster.

9. Don’t care what others have.

You don’t want the same things that your friends want. So why do you care what they have?

One of the biggest mistakes that people make is caring what other people have.

It’s the reason I don’t get caught in “keeping up with the Jones’s.”

When people ask me which entrepreneurs I look up to, my answer usually surprises them. I don’t answer with the cliche “Steve Jobs”, “Elon Musk”, or other billionaires.

I’m inspired by people in the dirt. Normal people in average jobs who decide that they want to build something for themselves. People who don’t “get” Facebook or Instagram, but are determined to figure it out. People who have humility to put in work in the face of judgement.

That’s why it’s easy for me to not get jealous of people.

If you’re worrying about other people’s accomplishments, that’s a losing formula. 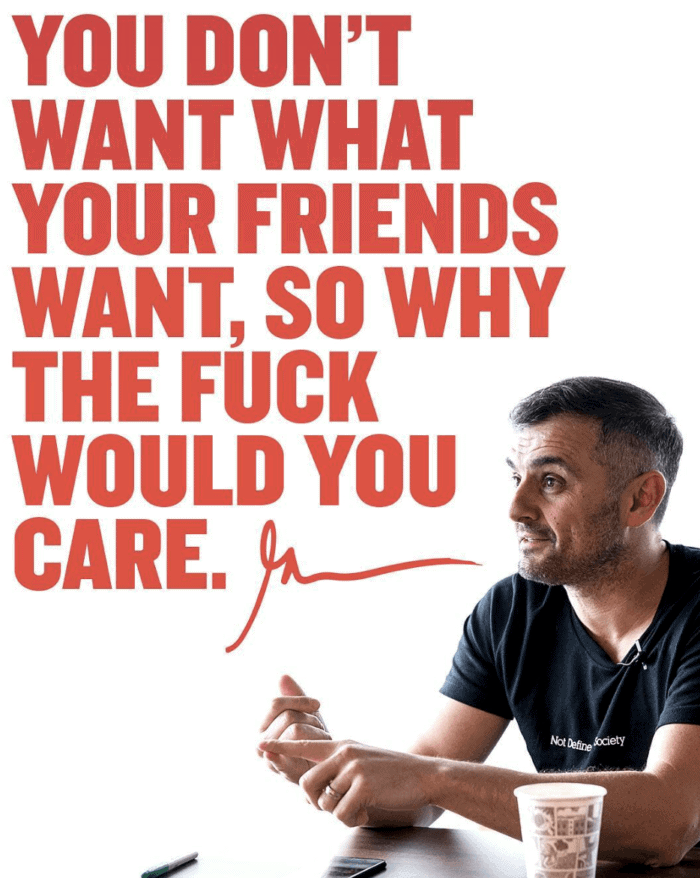 10. Care more about your legacy than your bank account.

The most successful entrepreneurs are driven by legacy over currency.

I’m obsessed with my legacy.

Every decision I make is predicated on the long term.

It’s not about what’s in my bank account. It’s about how many people will show up to my funeral.

If there’s one thing I hope becomes evident through my actions, it’s that I’m patient. I play the long game.

I want to have a big impact on the world, not just the people closest to me. I want my work to impact people. I want to make a real difference by allowing others to siphon my advice and become successful in their own pursuits. Whether as an entrepreneur or an artist or a lawyer or just a good, compassionate human behind.

I’m documenting my journey through my vlog, not just because I like that attention, but because I think it will be the ultimate resource for generations to come.

I genuinely believe that legacy should be something we push more of in the public conversation, not just in entrepreneurship, but in life.