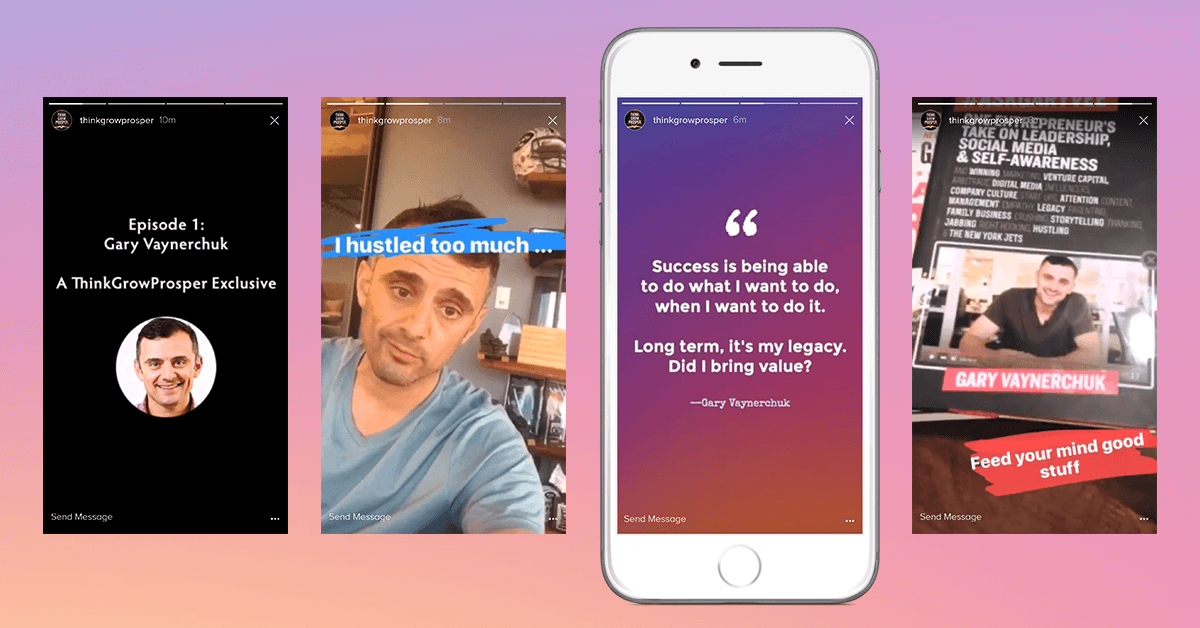 Even though Instagram Stories have only been around for two weeks, you can already see Snapchat-like behaviors crossing over to Instagram. One of the most beneficial, from a marketing perspective, is account takeovers.

If you don’t know what a takeover is, it’s basically a collaboration where you and another user appear on each other’s stories. Unlike a collaboration on Snapchat (where you needed to actually log in to the other person’s account), all you have to do is send the host account a photo or 10-second video for them to upload themselves. These takeovers are not only fun, but are also a great example of a 50/50 value exchange—a partnership that’s mutually and equally beneficial.

Think about it this way: a takeover is the same as getting a cool guest on your podcast, YouTube show, or even posting a selfie with a celebrity. When someone with influence shows up in your domain, there’s innuendo for endorsement.

It’s the modern day equivalent of guest appearances on rap albums. If you’re an up-and-coming artist and Kanye West shows up one of your tracks, it’s viewed as a seal of approval from Kanye. For me, it would be like a New York Jets player showing up on my account. I couldn’t imagine being a 23-year old version of myself and have Keyshawn Johnson pop up on my Instagram stories to just say “What’s up?” Not only would it be insanely amazing for me, but it would also be cool for all of my buddies to see.

Whether you have an account as a business, an influencer, or just a personal account, all takeover collaborators win. For the person that’s hosting the takeover, it’s just really cool. You get someone who can bring additional value to your audience. Even if you’re just starting out on the platform, there’s a feeling that you’re being anointed by that person.

For the person doing the takeover, there’s also a high endorsement value. Takeovers are a backdoor approach to accessing new demographics. It’s easy because you can siphon off of an audience that another account has already built.

For example, if you’re a catering company and you have a friend that’s a wedding planner, you can show off your food styling on her account. All her potential clients (who you are probably also interested in your services) can see your work too. On the other side of that same coin, the people who follow her for her wedding planning tips get the added value of your expertise.

I’m excited to see where this takeover culture will take us. I can see a lot of friends doing it to each other because it’s fun. But, I can also see a lot of marketers taking advantage of this 50/50 value exchange because it’s an easy way to reach new audiences and increase brand awareness.

There’s a lot of value in doing takeovers. If I were running your business, I’d spend at least an hour a day collaborating on them. The opportunity reminds me a lot of the early days of Twitter when I spent hours building and engaging with my audience. It’s such great chance to easily delve into new demographics. I predict I’ll regret not doing even more of these.

Whether you jump on them now or later, I think that over time, some sort of meme will develop out of the “takeover culture” and it’ll get really big. Think “Smirnoff Icing”—somebody or some brand is going to create a viral meme like that, but done on Instagram Stories. Maybe it’s just running up to someone with your friends, scaring them, and running away. I don’t know what exactly, but it’s going to catch on.

If you decide to start doing Instagram Story takeovers, you should approach them from a Thank You Economy standpoint. There’s reasons to be excited about this whether you’re doing a takeover on an account that has millions of followers or even just a few. If it’s the right audience and you can provide value, depth is all that matters.

At it’s core, the behavior behind Instagram Story takeovers is about deepening relationships, gaining exposure, hacking distribution, and raising awareness. And, the reason why they work is because they are a true win-win situation. That’s why they’re great—it’s all about value exchange.