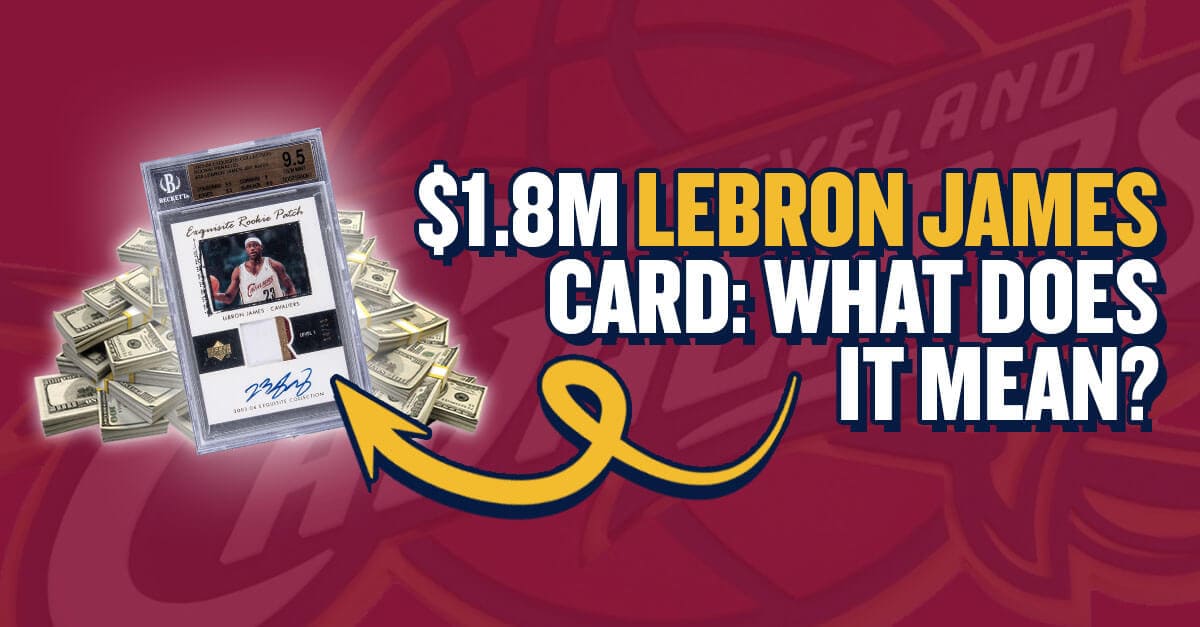 The $1.8M Lebron James Card: What Does It Mean?

“This moment will not only move the market for rare cards upwards — it will build intrigue among people looking for alternative investments, happiness, and interests,” Gary Vaynerchuk. Click To Tweet

“Whether it’s slime or sneakers, whether it’s esports when Drake and Juju [Smith-Schuster]  join Ninja on Twitch, whether it’s DJ Khaled on a jet ski or Ashton Kutcher challenging CNN to get to a million Twitter followers — every emerging consumer “thing” needs micro and macro moments,” Gary Vaynerchuk explains referencing what the recent record $1.8-million sale of a LeBron James 2003-04 Exquisite Rookie Patch Autograph card means to alternative investing.

“This sale of the LeBron James card hitting every news outlet (cnn, nbc, abc, cbs, fox) over the past few days is proof. It’s another building block on top of a trend I noticed two years ago. The impact matters. So many people have reached out to ask me: What does this mean?”

What does it mean when a basketball card purchased for roughly $50,000 is flipped for $1.8 million?

It establishes a new standard for modern, rare cards, says Gary, investing — an opportunity he’s touted with regard to Lebron James rookie cards since April 2019.

“This moment will not only move the market for rare cards upwards — it will build intrigue among people looking for alternative investments, happiness, and interests.”

“It’s amazing how life can go full circle. Over the last two and a half years, ( six months of studying and two years of executing), I’ve enjoyed sports card collecting and flipping so much. Although I haven’t exactly flipped my cards because many of the cards I sold were at [the] National … I couldn’t explain how fruitful the last 30 months have been.

At some point I think the [trading card] market is too early to transact. [Right now], I’m buying stuff forever — [I’m] not really speculating on quick, little things. [Rather], I’m going deep on all-time stuff and I’m just obsessed with basketball and I’m really into wrestling as well. I think wrestling cards have a big opportunity to bring a lot of people joy.

It’s just so fun. Think hard about what you did from 7 to 17 — whether it was music, knitting, or video games. [For me, it resurgered] because my little guy kinda got into the same stuff [I was into at that age] and that kind of dragged me back in. The timing was perfect because [during] the last five years the sports card market was getting hotter than it was in the past and now watching the market is just insanity.

I really genuinely believe that [the momentum] hasn’t even [really] started because sports cards are my generation’s art. I’d much rather have a really cool Wilt Chamberlain rookie card than a Picasso or an old muscle car.”

“There are plenty of people on Wall Street, more than you would think, that have turned a $50,000 investment into a $1.8 million investment,” admits Gary, but he counters that people who like sports and sports cards might have more fun flipping a card than investing in Wall Street.

Gary asserts that  sports cards are having a moment right now. A macro moment. The young entrepreneurs of today are pivoting to basketball cards in a monumental fashion. However, it should be noted that it takes time to learn this game and it takes years to win. Sports cards can be an incredible alternative investment but please don’t become delusional and believe this is guaranteed. Above all else, sports card trading should be fun. You love sports? Consider getting into the hobby.

So many people don’t follow their passions, he says. Instead of letting people tell you you’re too old to collect basketball cards—do what makes you happy and see how far you go.

There are so many different ways to make money. People turn their hobbies into incredible money making opportunities every day. Alternative investments are great ways to lean into your skillset, you just might become the master in a domain you haven’t dominated since you were a kid if you re-educate yourself and do your research.

“So, anyway, debate your 7- to 17-year-old self [about] what you were into. For me it’s [always] been a side hustle. [Flipping is] something I enjoy but I’ve begun to think how I can go deeper. I stay up until 2am looking at eBay auctions trying to figure out what’s the angle? What’s underpriced, what’s going to be cooler, which player is going to be better, which player is underrated. What a joy.”