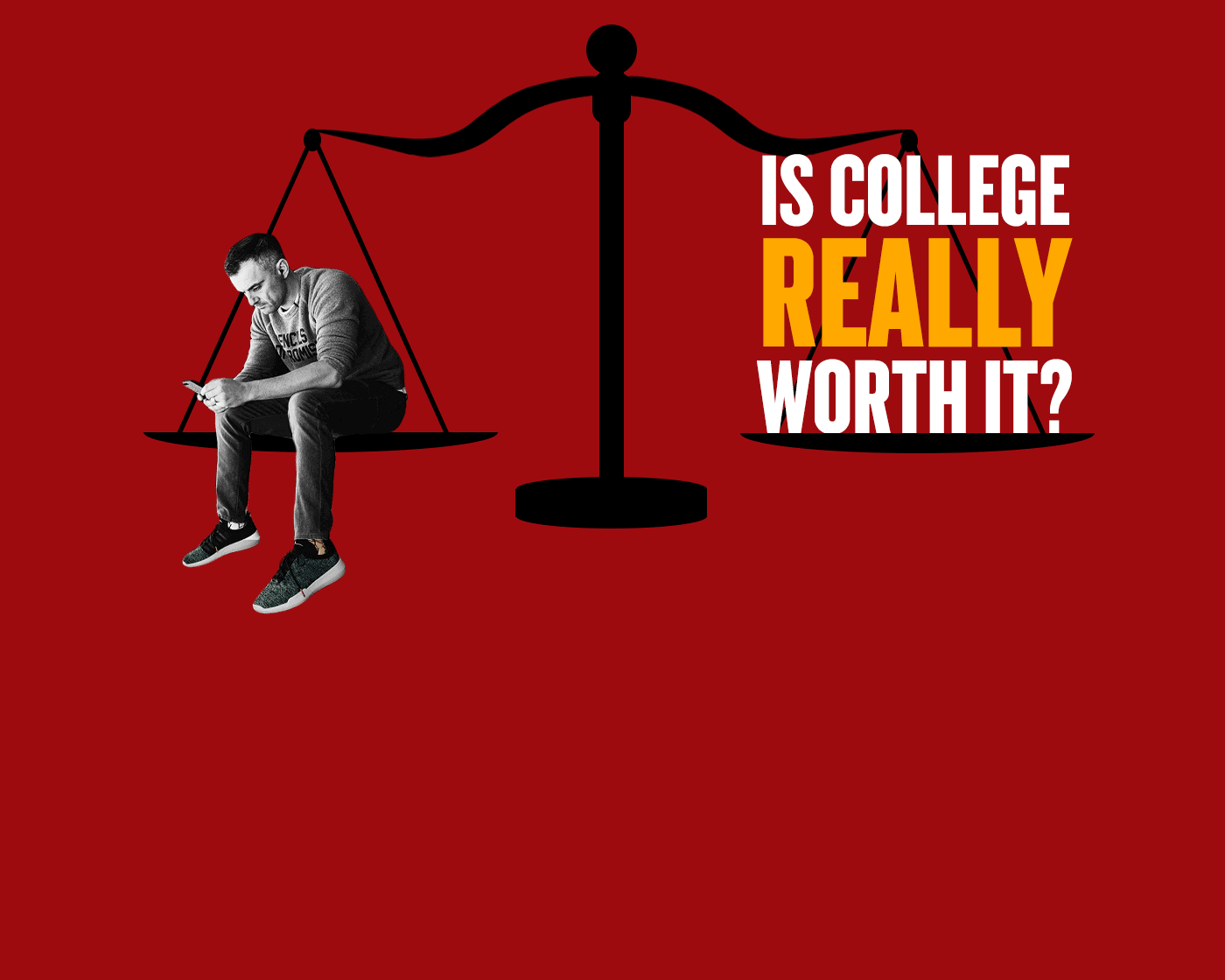 Is College Really Worth It?

I remember sitting in Mr. Mulnar’s 4th grade science class when I started to figure out if college was really worth it.

That day I got an F on a science test.

A straight up F, it was really terrible. To make things worse, I had to get it signed by my mom.

I was definitely not interested in being punished, so I hid it under my bed. It sat there for two days, but my conscience still had too much power. I got scared and told my mom about it.

Three years later I was flushing every test and report card directly down the toilet.

But no joke. I distinctly remember sitting down in my small bedroom, crying and debating in my own head trying to make sense of why I was having such an intense reaction to this test.

And then it hit me. The thought that changed everything:

From then on I decided to just punt school and take punishments four times a year when report cards came out. I decided to fail almost daily at school for years.

I went to Mount Ida College (which closed down in 2018). It wasn’t the greatest school out there, to say the least. I was viewed as a loser by my friends’ parents — a kid who didn’t have a shot at anything.

But I knew what I was meant to do. I saw something different in myself, and I had enough self-awareness to recognize it.

It’s not that I didn’t care. It was actually the opposite. I honed in on my skills, to concentrate on what made me happy and what fulfilled me. I learned more about selling baseball cards and then wine. It led to me building Wine Library, VaynerMedia and everything else that I’m so proud of today.

I decided to fight what society expected of me and deliver on what made me happy.

And that’s ultimately what I wish for all of you — to do what makes you happy.

My intent is not to stop everyone from going to college or tell everyone that they can fail school and do what I did. That’s just not true and it’s not what I’m saying at all.

I’m saying kids need to be self-aware and have a difficult conversation with themselves about whether a college degree would really put them in the best position to succeed.

Here are some of my thoughts and POVs on how to decide if college is worth it:

1. If you’re collecting college debt to be an entrepreneur, that’s probably a bad idea

If you live, breathe and sleep entrepreneurship, and you have shown that ability before the age of 18, you should really consider whether or not it makes sense to go to college.

Entrepreneurship takes execution. You get good at it by “doing.”

It’s like tennis. You can read all you want about how to hit the ball, but until you actually start practicing, you’re not going to get any good. You’re not going to find out whether you truly have the talent to be great.

On top of that, there are many new ways to get the information you might need to know about business at a fraction of the cost. The information is out there and likely free.

The problem is getting society to accept and validate that truth. This might be a reason why it could be valuable to get a degree – it could be useful in getting a job somewhere. Especially at more old school companies and institutions. But when you’re an entrepreneur, the market doesn’t care where you got your degree from.

So many people think they want to be entrepreneurs. Then they go to college, collect $100,000 in debt, then start over at 25 once they realize how hard it really is.

That’s why I push so many entrepreneurs to “do.”

If they want to consume information and learn about business, I push them to do it through resources online that are free or much, much cheaper than a college education. Or better yet, go work for free for an entrepreneur they admire and learn by getting close to him or her.

I understand how college can be beneficial for those in certain fields and how it can provide ROI, but I just don’t see that for entrepreneurs.

2. Pressure from parents is not a good enough reason to collect enormous debt

This is the one that really bothers me.

Parents are out here forcing their kids to collect debt just so they can feel good about their kids going to a “brand name” university.

We saw this in 2019 with the college admissions scandal. Parents were buying their kids’ way into colleges because they wanted to use it as a way to fix their own insecurities. Many other parents come with a similar mindset, pressuring their kids to go to school and collect debt just so they can brag to their friends at the country club.

If parents are paying for their kids to go to college, I get it. But pushing kids to take on crippling debt that they can’t even declare bankruptcy to get out of is just not something I believe in.

This leads to a much, much bigger conversation that needs to be had around parenting.

3. The brand of college will collapse in the next recession

I genuinely believe that student loan debt will tear down this economy.

There are so many kids out there in tens of thousands, even hundreds of thousands of dollars in debt on insane interest… making $34,000 / year… and still getting big loans to buy cars and apartments.

The math just doesn’t add up. I really think it’s just a matter of time until everything collapses.

When it hits, it’s going to hit hard.

And just like the 2008 recession when everyone blamed the banks for tearing down the economy, next time people are going to blame colleges.

I believe that my generation’s kids will be the first generation of parents that doesn’t blindly believe in college as a whole.

Ultimately, it’s not a conversation about whether college is “bad” or not worth it. It’s about collecting enormous debt if you want to become an entrepreneur. If you’re taking on college debt to eventually start your own business, you are not in a good place.