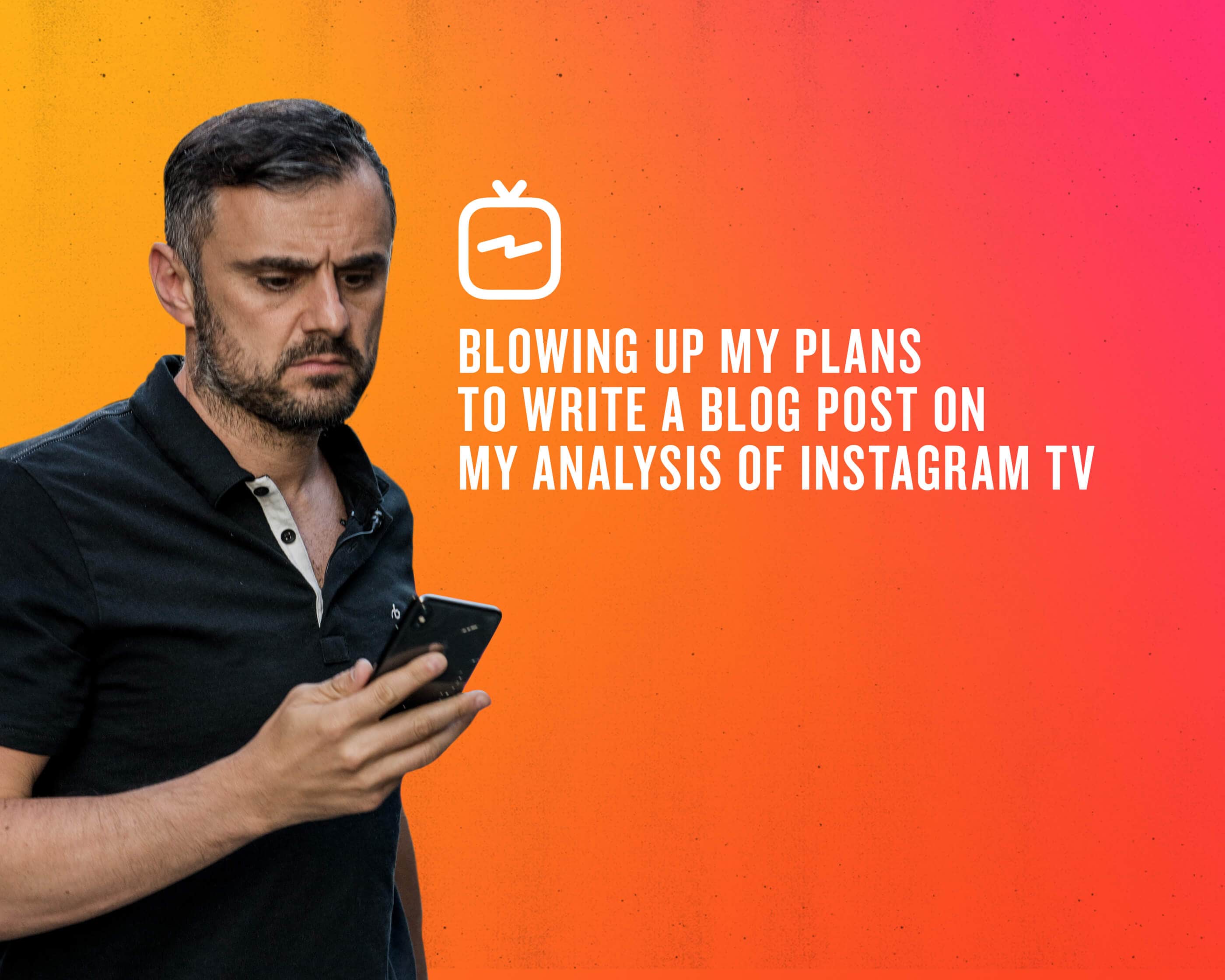 You see, despite being a 5X New York Times Best Selling Author, Gary actually isn’t a very good writer. Frankly, Gary barely writes in general, with the exception of the captions that he writes for his Instagram posts, yet he can simultaneously speak enough content for a novel in a matter of minutes. For those of you that may not know, in order for Gary to write blog posts and put out content in the written word, we (Team GaryVee) ask him a handful of questions about whatever the topic of the given article is. By giving Gary the format of interview questions, he can still craft his own articles from his POV without actually having to type the words.

The article you’re about to read is similar to an article we made a couple years ago, Content on Content on Content, and serves as an ideal example of how Gary looks to scale his brand’s content production and create content from other pieces of content. To give you the literal breakdown of what this blog post is made up of, this is an article that was made from an article, which was made from a video, which was filmed during the creation and review of an article.

With all being said, a little over a month ago, our team saw news from various online articles that Instagram would be launching a new app called IGTV, which would allow users to post vertical videos up to an hour long in duration. As a result of the news, Gary wanted us to prepare an article on the launch of IGTV and what his take on the platform is so that we could crush it with the SEO for Gary’s blog and be a first mover in the space.

After we spent some time getting the article together, we didn’t actually get the opportunity to sit down with Gary to review the article until two weeks later because he was in Cannes, France for the Cannes Lions International Festival of Creativity, plus a lot of what we had anticipated on mattering for IGTV didn’t exactly meet our expectations. However, when we did finally sit down with Gary, he came to the conclusion that the original IGTV article wasn’t one that he actually wanted to write because he would be making a ton of assumptions in order to actually publish anything meaningful. During our meeting time for the article, we came to the conclusion that we were going to scratch our original plan for this article and write an all encompassing take on how we got to this point in the first place and Gary’s $0.02 on his content strategy and Instagram TV. That article is here:

Why I Haven’t Come Out with My Thoughts on IGTV

I love getting meta with my content. For those of you that understand my content distribution model well, it shouldn’t come as a surprise to you that this article was made from a video, which was recorded during the creation of an article with my team.

To give you some context, Instagram recently launched a mobile-centric long-form video platform called “IGTV” (Instagram Television). IGTV is a standalone app that has a discovery feed integrated into Instagram. This basically means that when you’re on Instagram, you’ll be able to go to an explore section and find long-form content curated for you by the IGTV algorithm based off of your interests and people you follow, which will then take you to the IGTV app.

Simply put, a few weeks ago, when IGTV was announced, I had my team put together an article covering the app so that we could take advantage of the initial buzz and crush it on the SEO aspect for my blog. What ended up happening is that shortly into the process of reviewing the article, I realized that in order to execute on my initial plan, I was going to have to make some pretty big assumptions if I really wanted to give my $0.02 on the new platform. The issue is that I don’t have an opinion on IGTV yet, and I’m not in the prediction businesses.

Look, yes IGTV is here, but the platform hasn’t been out long enough and there hasn’t been enough going on with it for me to give anyone an opinion on it. I know that I have a reputation for frequently being right with my “predictions”, but all of the “predictions” that I’ve made in the past were given after I was thoughtful about whatever I was talking about and things were already obvious. Frankly, there’s just nothing obvious about IGTV yet. Sure, I could have continued with the article that my team prepared and just guessed on what could happen with IGTV, but I’m not a pundit and that would put me in a vulnerable position that I don’t want to be in. On the flip side, I can wait until I have a better understanding of IGTV and then give everyone my informed opinion down the line, which increases the likelihood of me being correct.

Again, I really don’t have a materialized opinion on the IGTV platform, but I can give you my surfacelevel thoughts. For starters, I think that Instagram really overestimated how much TV teenagers actually watch when they said in their IGTV announcement that teenagers are watching 40% less TV now than they did five years ago; I honestly don’t think teenagers are watching TV, period. Aside from that, I’m a little surprised that Instagram decided to launch a completely separate app as opposed to just including long-form video in Instagram itself; long-form video in Instagram would have crushed, and I still believe that to be the case. Instead of implementing long-form video into Instagram itself, they decided to directly attack YouTube, which makes sense given that they’re coming out of a very successful attack on Snapchat. Also, let’s bare in mind that YouTube is not very mobile-friendly. Take it from someone who hasn’t owned a computer in three years, YouTube is not optimized for mobile. Instagram is obviously trying to go the extra mile in becoming mobile by making IGTV a vertical video app, but aside from that, they really just have to win on having a mobile-friendly UI.

To put things into perspective, this is the same reason why Twitter was able to grow so much in the shadow of Facebook; Twitter was mobile-friendly while Facebook was for desktop. To say the least, Facebook was pretty slow to adapt to the change to mobile devices. In the same sort of light, I actually think that Tumblr could have been what Instagram is now had Tumblr been more mobile-centric. Tumblr was really slow in their transition to mobile, which is what gave Instagram so much room to grow into what it is today. With this in mind, it seems pretty smart for IGTV to go after YouTube since the YouTube app really isn’t all that great.

Moving past my immediate thoughts on IGTV and Instagram’s execution of the platform, there’s the obvious follow up question of “should you distribute your content on IGTV?”. The simple answer is of course you should, it’s more attention and exposure. What’s the downside? Look, Instagram really wants IGTV to work so that they can potentially take a piece of the market for long-form video on mobile from YouTube. So, I think that if you start uploading your content in a way that’s native to IGTV, or if you start creating content specifically for IGTV, that you’ll probably do pretty well.

To quickly recap, just because I know that I’ll get a few more clicks or reads for having an article out on IGTV when it launches (or any new app/technology for that matter) doesn’t mean that I’m going to do it. I would much rather take the time to develop an understanding for the platform before I give anyone my thoughts on it. It’s the same reason why I have a reputation for being historically correct; I wait until I feel it in the culture of our society or until I have a really good sense of where things are going.