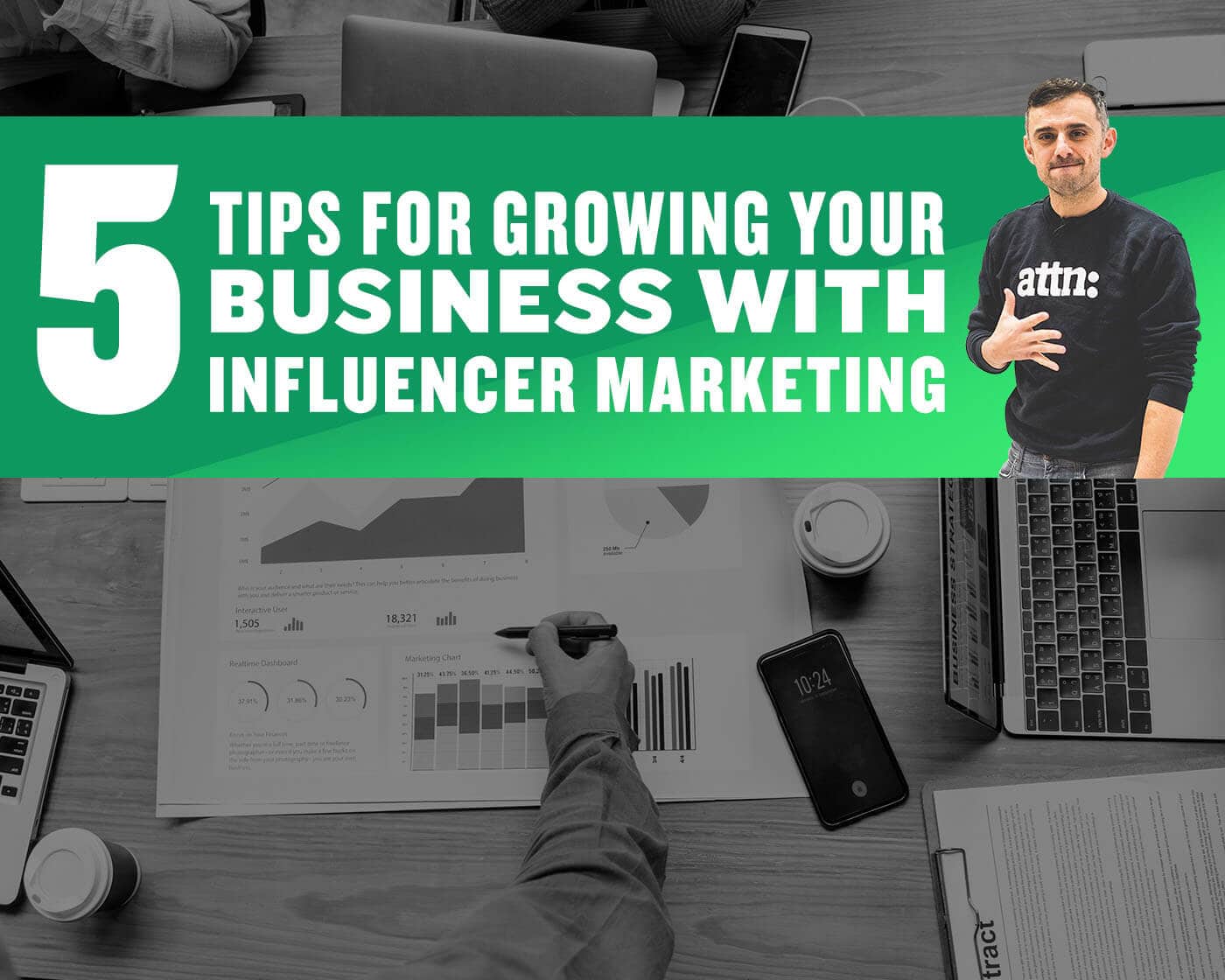 5 Tips for Growing Your Business With Influencer Marketing

I think influencer marketing is going to have an incredible global era for the next decade, and we’re just at the beginning of it.

Everyday there are brands that go from $0 – $15 million in sales with no overhead or infrastructure on the back of influencers on Instagram. If you’re not working with influencers, you need to be.

In this article, I drop some advice on how to grow your business with influencer marketing.

1. You Have To Give Value To Influencers Before You Siphon From Their Audience

If you’re just starting out your business, influencer marketing is a chicken or the egg game: You want influencers because you want them to bring the thousands or millions of people that pay attention to them over to your product, service, brand, etc., but you might not necessarily have the capital or resources to pay for a partnership.

The only other option you have is to get very personal, and very creative. Think of what would bring value to them, not just you. For example, if you want to partner with a male fitness influencer in New Jersey, and you know he likes the Jets, send him a custom Jets jersey when you send over your product.

If you want to partner with a female fashion influencer, and you know she has a pet dog she adores, send her a customized item for her dog when you send over your product. Personal touches and practicing kindness like this will go an extremely long way in increasing your chances of garnering publicity from influencers in the early stages of your business.

I want to completely eliminate the “but I have no money” excuse. So here’s another way you can go about it:

Once you find out where they are most active, go through their last 5, 10, 15 posts and add your two cents to the conversation.

Keep doing this with their new posts as well. Don’t even think about asking to work with them until you’ve built up some rapport, or at the very least some context. Then, go in for the ask, the right hook. If one out of every 80 influencers say yes, and you want 20 influencers, that means you would need to reach out to 1600 people.

3. Not All Influencers Are Equal

A common mistake many businesses make, no matter what stage they are in, is they partner with influencers before properly assessing their audience and engagement.

You need to evaluate very carefully who is following the influencers you want to work with. If you’re going after some 18 year old boy with a fanbase of screaming girls, but you sell sweater vests to dads, you’re going to miss the mark. So you need to know who they’re reaching, and if it lines up with what they promise. Make sure you know they can deliver on the specific audience you are looking for.

Moreover, you should look past the top line number of followers and look at the actual engagement happening on each individual post. On a quantitative level, you’re looking for what that engagement is as a percentage of their overall followers.

You also need to look at each of those interactions from a qualitative standpoint to see if those interactions are just superficial, or if they’re actually interested and engaged. I may not have the biggest following on Instagram, but I know that my posts could do a hell of a lot more for BestBuy or Safeway than another user with 30x my following because my followers aren’t just following me for attractiveness 😉

4. Micro-Influencers Are On The Rise

There’s no question that some of the most valuable influencers in the world have 30+ million followers. But many of you may not be in a position to pay a top 1% rate. Nor do you have to. Recently I’ve been stressing partnerships with micro-influencers. Why? For one, they are more affordable. But even more importantly, their audience is often much more specific, and much more engaged.

If you can find micro-influencers that have audiences in your target demographic, go for it. And who knows, one of them might blow up over night and change your business (Fashion Nova partnered with Cardi B before she became a signed artist).

This is a common theme of mine. I disproportionately value speed over any other tactic, particularly when it comes to an underdeveloped market such as influencer marketing. Sure, there is no set price for X influencer with Y number of followers and a Z% of engagement. And there is no one set in stone method of tracking influencer marketing campaigns. So test, test, test. Don’t sit around and debate about what it might or should cost.

Go out and do, then evaluate and optimize.