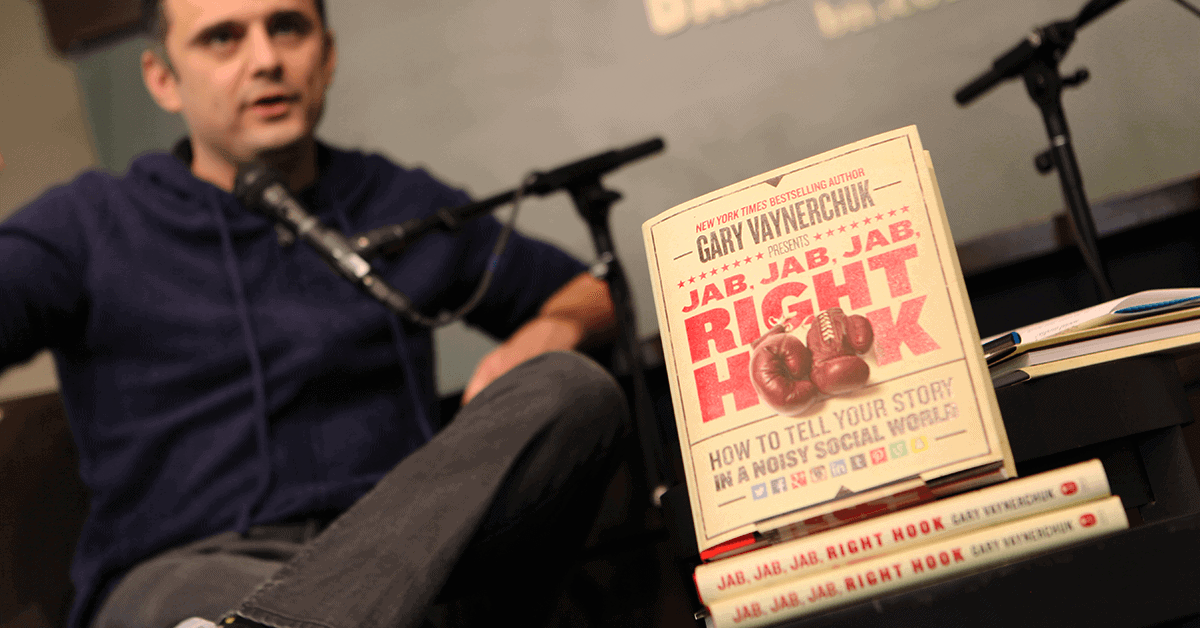 The One Thing I Didn’t Clarify Enough in Jab, Jab, Jab, Right Hook

My fourth book is about to come out in just over a week. In the anticipation for it’s launch, I’ve been thinking back on my past three books; I still stand by everything I’ve said in every single one.

But in my third book, Jab Jab Jab Right Hook, there is one big clarification I should have made.

For those who may not be familiar, my entire business philosophy pretty much revolves around the jab jab jab right hook method. Jabs are the value you provide your customers with: the content you put out, the good things you do to convey your appreciation. And the right hook is the ask: it’s when you go in for the sale, ask for a subscribe, ask for a donation.

You gotta throw some jabs before you throw your right hook.

My favorite analogy to illustrate the difference between jabs and right hooks are cartoons from the 1980s. When the Transformers cartoon was on Saturday mornings, you would tune in and watch for free. You’d do the same with The Carebears. Or GI Joe. You’d watch the cartoons and not have to pay a dime. But when the movie or new action figure or toy came out, you went and paid for that. Cartoons were the jabs that pulled you in so you would then pay for the movie or toy.

Everyone seems to get what I mean when I explain what jabs and right hooks are. But people are fundamentally misunderstanding one major part of that formula. And I want to clear that up now.

Just because you jab and jab and jab, doesn’t mean you automatically get to land the right hook.

I’ve done 185 episodes of a show answering questions people ask me on Twitter. I write articles. I answer questions on Snapchat, Twitter, Facebook. I do this all for free. Not because

I have to land the hook. It’s my hope. It’s my aspiration. But it’s not why. I do it because it gives me a chance to even throw the right hook at all.

You have to be okay with not landing the right hook.

The key to being a strong entrepreneur or executive is to understand that patience is extremely important. Sometimes when people complain to me that their right hook didn’t land, I find out that they were only jabbing for three months. In the entire span of your career, whether it’s been forty years or it’s going to be forty years, three months is nothing. If you structure your business right at the highest level, landing one right hook in six to twelve month period should be enough. It should bring you enough ROI and value to justify the rest of the year of jabs.

Additionally, right hooks change all the time. If tomorrow, Instagram allows linking out in native posts, you have to shift to use that as a right hook. You have to adapt. Twitter was huge for me in 2010 and 2011, but now I am siphoning my audience to Snapchat more. I’ve had to change and shift multiple times to match what is happening in the marketplace. You might have a big set up planned for a right hook, but be flexible. Always. Things change fast. 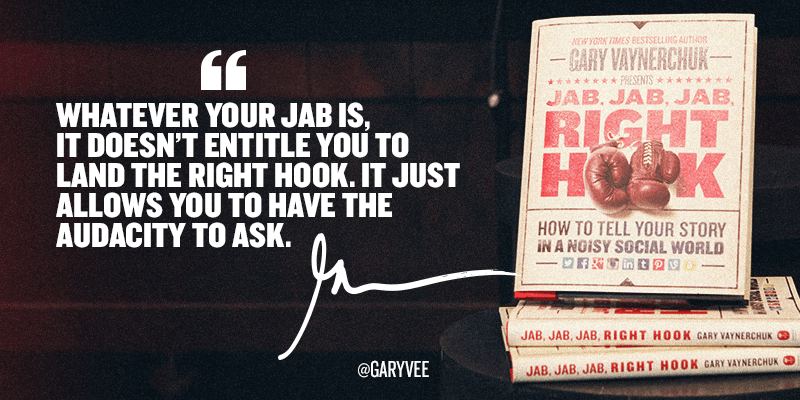 I’ve thrown a ton of right hooks that didn’t land. And they were preceded by (what I thought were) some great jabs. I get people jobs. I make connections. Set up meetings. But the right hook doesn’t always land. I don’t dare have the assumption that my jabs will always work out into right hooks. Neither should you.

Taylor Swift is excellent at throwing jabs, so when it comes time for her right hook, fans are more than happy to oblige.

Just Google search “Taylor Swift nice gesture” and the results come pouring in: she got a fan who missed her flight tickets to another show. She made a playlist for a fan who was sad over a breakup. She donated to a family’s Kickstarter after a horrific car accident. Here is a list of ten more amazing things she has done just because she can. These are all things she could do quite easily, but they mean the world to the people on the receiving end. And even though they apply to only a few people at a time, her fan base sees them and appreciates what she is doing for others in their community.

Taylor just left this comment on Instagram for a fan and I’m bawling in tears so hard right now. #same pic.twitter.com/xD9RzkMBSp

So, when her most recent album came out and she asked for people to actually buy it, no streaming services, guess what people did?

I’ve thrown a lot of right hooks in my day. In fact, I’m throwing a shit ton right now for my book. These are my top three tips for throwing the right hook when you’re ready.

The big lesson of a right hook is that you want it to feel natural and you want consumers to say “of course!” when they see it. If that is their reaction, you’ve taken all the right steps to get there. If you’ve provided value, given them great content, done everything you can to make the journey as smooth as possible, I can promise you you have that much better of a chance of making the sale and getting that customer.