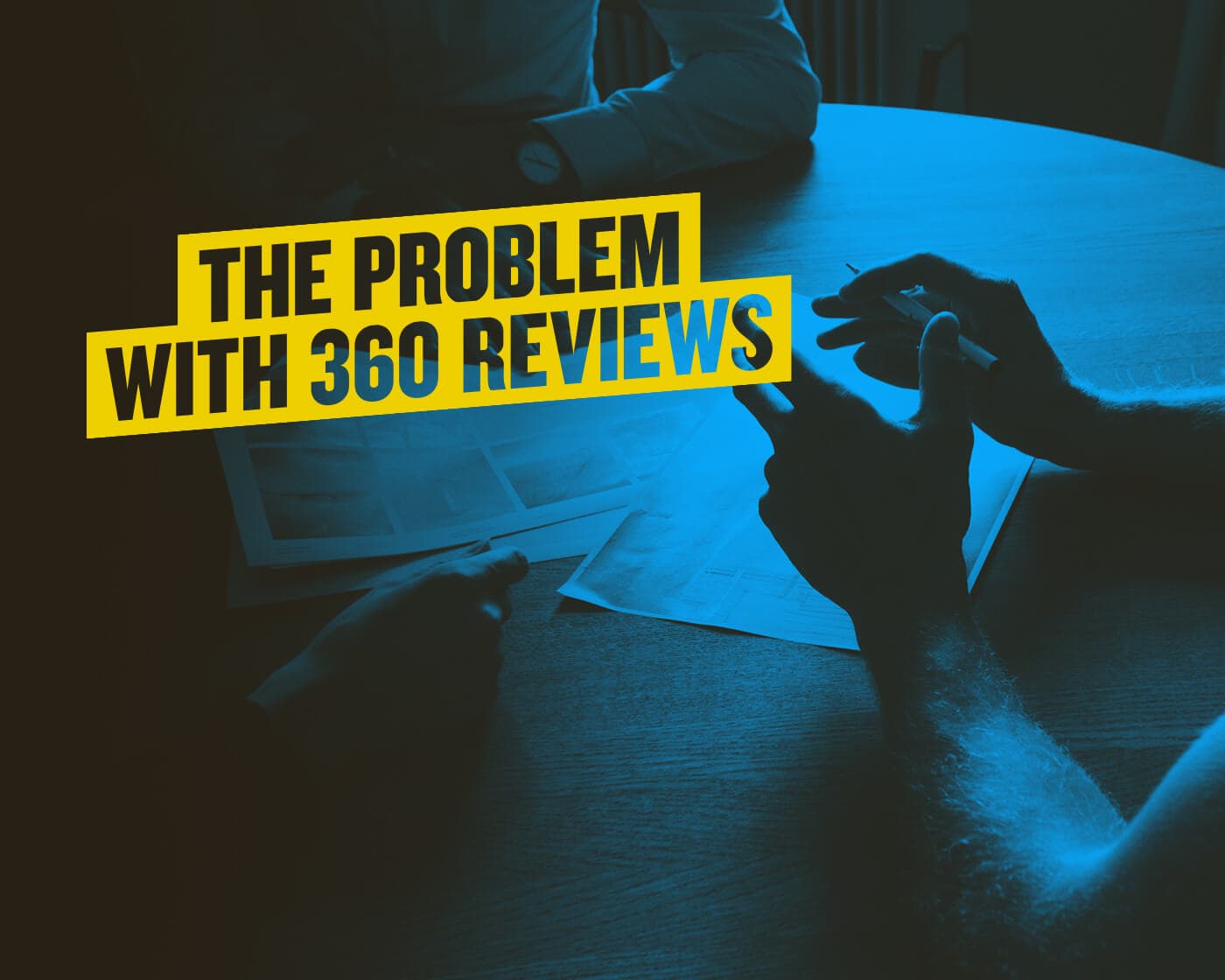 The Biggest Problem With 360 Performance Reviews

I’m fascinated by how performance reviews are conducted in companies.

In my point of view, the methodology behind “reviews” and feedback in most organizations is flawed at best. 360 performance reviews usually don’t give full context on what’s actually going on in a company.

Why most performance reviews are flawed

Reviewing the people you work with and giving feedback is a great thing to do. It’s something I advocate for at all times.

But what I’m concerned about is, a lot of people take feedback blindly during 360 reviews. Managers and bosses who are evaluating the feedback just look at the raw statements or “ratings” without thinking about the context around it.

Is it coming from a pure, well-intentioned place? Or is Susie rising up the ladder, and Karen’s afraid that Susie might take her spot one day? Did something bad happen in Karen’s life, and she’s just taking it out on Susie?

I see this happen all the time. Many managers or directors get to a certain spot in their careers where they get comfortable with a $200,000 / year salary, and then try to “tear down” everyone around them who might be a threat to their spot.

Because of that, they might try to suppress their direct reports or their understudies.

I believe people should be “reviewing” each other at all times – not just quarterly or yearly.

How to give better feedback to your employees

Giving feedback to employees who are underperforming can be tough, depending on how you’re wired.

At the end of the day, if you have the luxury of being the “judge and the jury” (i.e. a CEO or a leader), the pressure is on you to give the right type of feedback and manage employees the right way.

There are some employees at VaynerMedia that are highly talented but underperforming, and it’s entirely my fault. It might be because I haven’t created the infrastructure that allows them to shine. Or their bosses might not be “clicking” with them and that’s making them less passionate about their work. Or we haven’t asked the right questions around what interests they have and where they want to be working.

There’s a lot of serendipity that comes with where you work within a company and the situations you’re in, so it’s super important to have a lot of communication around that.

The way I come at it is, “Hey Rick, I noticed you’ve got talent oozing out of your eyes but you’re not delivering on the hustle – and that’s an important variable there. When you’re a leader, you’re creating the rules of the game.”

If you don’t like it, you’ve got full freedom to change the rules.

How to give better feedback to your boss

It can be hard to navigate the dynamic of giving feedback to your boss. We’ve all been there: you’re saying “I hate my boss” because you’re pretty sure they’re messing things up.

But no one wants to say anything because, well, they’re the boss. But as the situation progresses, giving feedback to your boss seems more and more like the right thing to do.

How do you tell your boss they’re wrong without jeopardizing your position or sounding like a jerk?

The first step really here should be this:

Checking over and over that you are sure they are wrong. Giving feedback to your boss is one thing, calling him or her out incorrectly is something totally different. It might sound like a cliche, but you really don’t want to get caught looking like an idiot in this type of situation. That can backfire majorly.

But in the end, I truly believe this: if your boss is a great boss, they will welcome performance feedback, and they will listen to you.

If your boss is good at being the boss, they will take your feedback and actually listen to what you have to say. Period. An enormous part of being the boss is about learning to be a better listener than speaker. You help the team out by being aware of what is going on at all times.

What does that take?

The key to performance feedback is respectfully pointing out things you disagree with. If you go down that route, it’s a win win situation.

Think about it: if you give that information to the boss, and the boss agrees with you, you’ve won points and hopefully the situation will be dealt with. If they don’t, and they completely disrespect your feedback, then now you know what kind of person you’re working for.

So, with those two points about talking to your boss in consideration, to me there is no risk in giving feedback to your boss. As long as you keep your cool and are diplomatic about the situation, the two outcomes we outlined above can only end well.

If you are putting your future into the leadership of an individual, don’t you want that person to be respectful of feedback? Or learning from their mistakes? This could be the question that determines if you are in the right place.

So if you have something to say, don’t hold back.

Be respectful and approach it from calm ground. But don’t stick around if they won’t take you seriously.

It’s not worth your time.