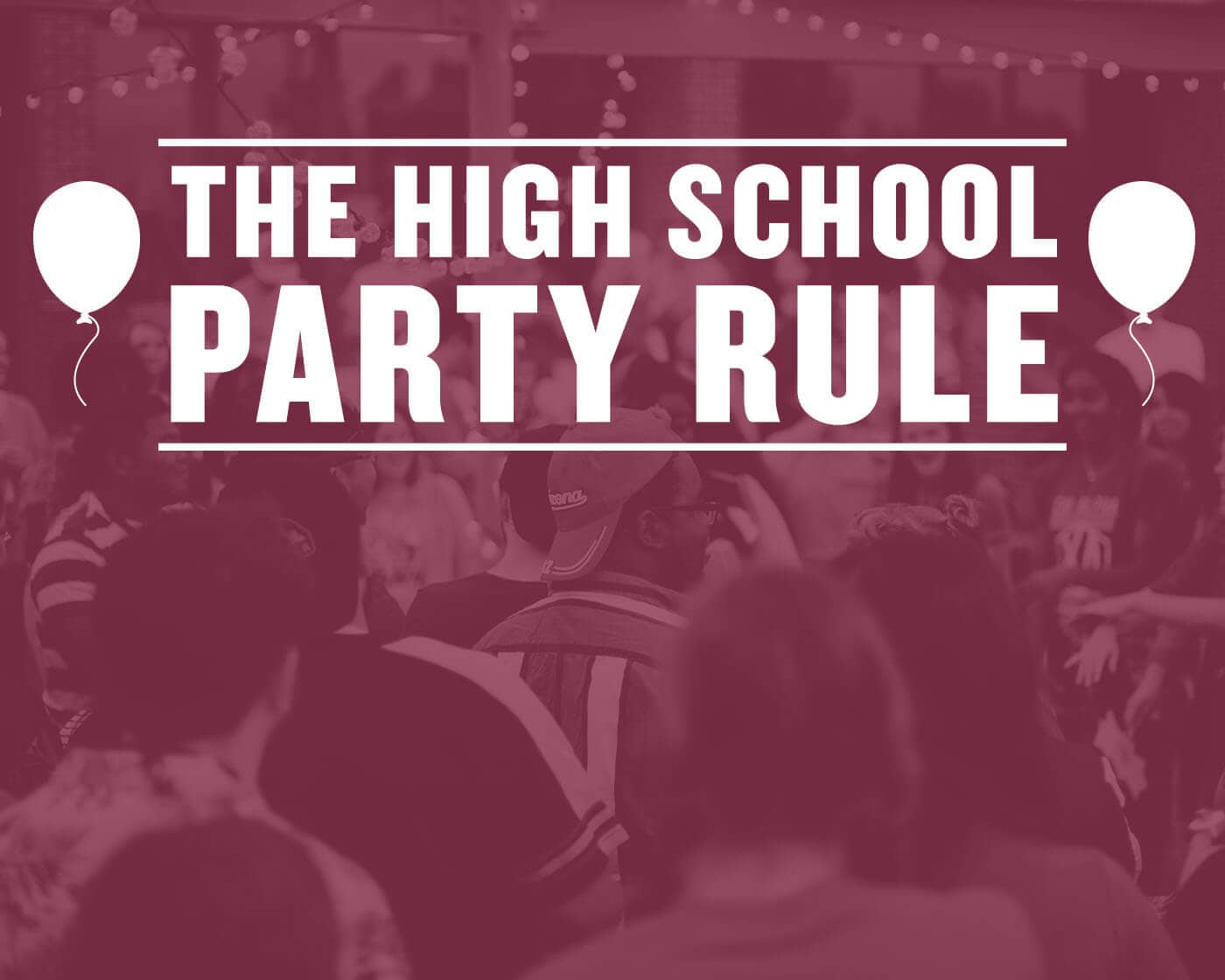 When enterprise companies ask me what B2B marketing strategies they should leverage, I always tell them the same thing:

Think back to high school…

For a lot of “mid-tier” popular kids — kids who weren’t the coolest —  an incredible opportunity came up in during sophomore or junior year.

If their parents traveled a lot, weren’t home much, or just didn’t care, they had the ability to host parties for the cool kids. And that made them dramatically more popular over the years because the popular kids needed a place to hang out.

Many of them started out say, “lower middle class” in terms of popularity. But they rose from that level to the top 5-10%.

These kids weren’t necessarily built to be popular on their own, but “hacked the system” and figured out how to elevate their brand. You might know a few kids like this if you think back to high school. You might have even been that kid yourself.

(Not that popular high school kids are necessarily “better” humans — they were just good at figuring out the game).

What people don’t realize is… same thing applies to B2B marketing. Imagine if you could be the “popular kid” among your clients and customers — and get them to give you business on the back of that popularity.

You can get to that level faster than you think.

Social media marketing has made B2B advertising so much easier – yet most companies in the space just don’t see it. In B2B, you know exactly who you’re targeting. You know exactly whose business you’re trying to get and what they look like.

The best way to do it is through the “High School Party” Strategy.

Here’s how you can apply it B2B (and high ticket B2C), plus other marketing tactics you could use to grow your business:

You can position the event however you want.

If it were me, I would do it around wine because that’s authentic to me. But you could host a dinner, a golf competition, or a number of other things.

Here’s a very tactical example of how you would do this if you had a business that sells to dance studios:

On Facebook, the broader your reach is, the lower your cost will be generally speaking. Pick an area to host your event that has a lot of “ideal clients”, so you can run ads at a lower cost.

Record a video straight from your phone or webcam. Keep it as authentic as possible.

“Hey Phoenix, I’m going to be in your city soon! We rented out a room at Johnny’s Steakhouse — I’ve seen the great Yelp reviews and I’ve been wanting to go there for a while. We got some incredible food and wine, and we’re going to be putting on a 20-person dinner where we’re going to talk about the state of the union of dance studios.

Things like opportunities in social media, how to make more margin, how the TV shows have affected us, the macro trends, and more.

My family’s been in this business for 35 years, and I’ve worked in it for 15. I think we’ll have an awesome conversation.

Please fill out the form and I will pick 20 of you to join us for a private dinner. Can’t wait to see you!”

The reason I’m such a big fan of “raw” content is that people can tell that you’re being “you.” This is super important on a platform like Facebook where your content does both branding and sales (so you don’t hurt your brand while you’re trying to convert).

Step 3: Put all the information in the copy

Include the event details plus the Google Form in the copy of the post.

Step 4: Design the survey with an open-ended question

In the Google Form, include one open ended question where the answer will give you an indication as to whether or not you can convert them.

You can invite the people who give the “right” answer to this question to your event.

Step 5: Host the party with a captive audience

Hosting the event doesn’t have to be super complicated either.

If you’re introverted, you could literally prepare note cards in advance, and start the event by saying something like “Thanks for coming guys. Today we’re going to talk about the state of the union of dance studios. Let’s go around the room and share our two cents.”

As long as people get value out of the event, you’ve won because they’ll remember you as the host.

People in B2B always complain about not being able to “go wide” when they create content. But the truth is, many B2B companies don’t need to go wide.  Even if you have 1500 people listening to your niche podcast, that could be enough to do millions of dollars a year in revenue!

If you’re the host of a small podcast in a niche, and you’re reaching out to experts or thought leaders and asking them to be clients on your show, you’re essentially “inviting” them to your party.

You’re telling them that they’re valuable enough to be on your show, and it plays to their ego. You get a valuable guest, and they get to send a link to their buddies from college that they were on a podcast.

And you’ll be stunned by how much easier it becomes to get their business. If you’ve got a popular podcast in a narrow niche and your guests are senior execs at the companies you’re trying to do business with, they’ll be so happy to be “fake famous” that they’ll just give you the business.

Hosting an event or “owning” the medium (i.e. podcast, vlog, etc) where the popular kids (i.e. the people you want to get as clients) want to hang out is an unbelievable arbitrage in 2019.

3. Focus on what your customer wants, not just on the service you provide

These next two points aren’t directly related to the “high school party” concept but it’s still something I really believe in for B2B companies.

A few years ago, a lawyer asked me how she could leverage content to grow her business.

The answer I gave her surprised her a little bit, but it’s still so true – even in 2019.

Guinness beer had a problem about 60 years ago. Their sales in pubs in the UK declined for the first time ever and they had to figure out a new strategy.

They went out and did old school market research and surveyed people in bars. Guinness found out that the two biggest things people talked about were soccer and trivia.

So they created the Guinness Book of World Records.

They started a “media company” to solve their problem.  By owning the media company that produced content that people at pubs consumed, they were able to “bake in” advertisements that increased beer sales in pubs.

I told the lawyer to do something similar. I told her to become a media company.

For example, she could start a golf website that covers golf topics, and advertise her legal business in every seventh post in the form of “branded content.”

Guinness was early, but I fundamentally believe that this is going to be the blueprint of how companies in the future do business.

I put out an 86-page slide deck around my content strategy.

For me, my “pillar content” is DailyVee on YouTube. It’s a “documentation” of my life  as an entrepreneur and operator. From there, I create short form pieces of content that are repurposed from DailyVee — this includes articles, memes, mashups, images, and more. 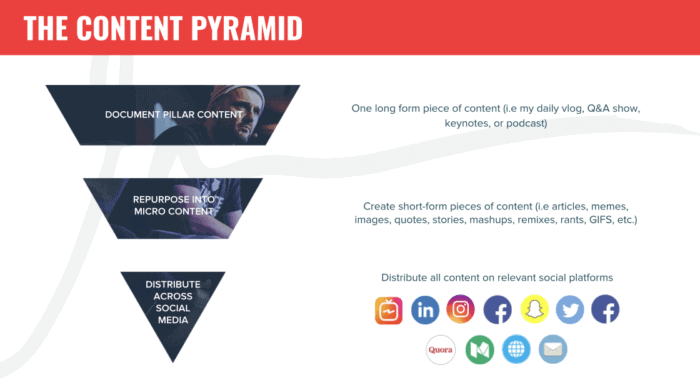 After that, I’ll distribute content across all my social channels.

I believe in this strategy so much for B2B companies. Even though you’re selling to businesses, you’re targeting human decision makers. And humans will respond to your content.

Whatever it is, please understand that putting out any content (even if it’s totally unrelated to your niche) is better than not putting out anything at all. And too many people think it’s the reverse.

Being the “host” of a vlog, podcast, or show that people in your industry consistently consume will give you massive leverage with the decision makers in your space.