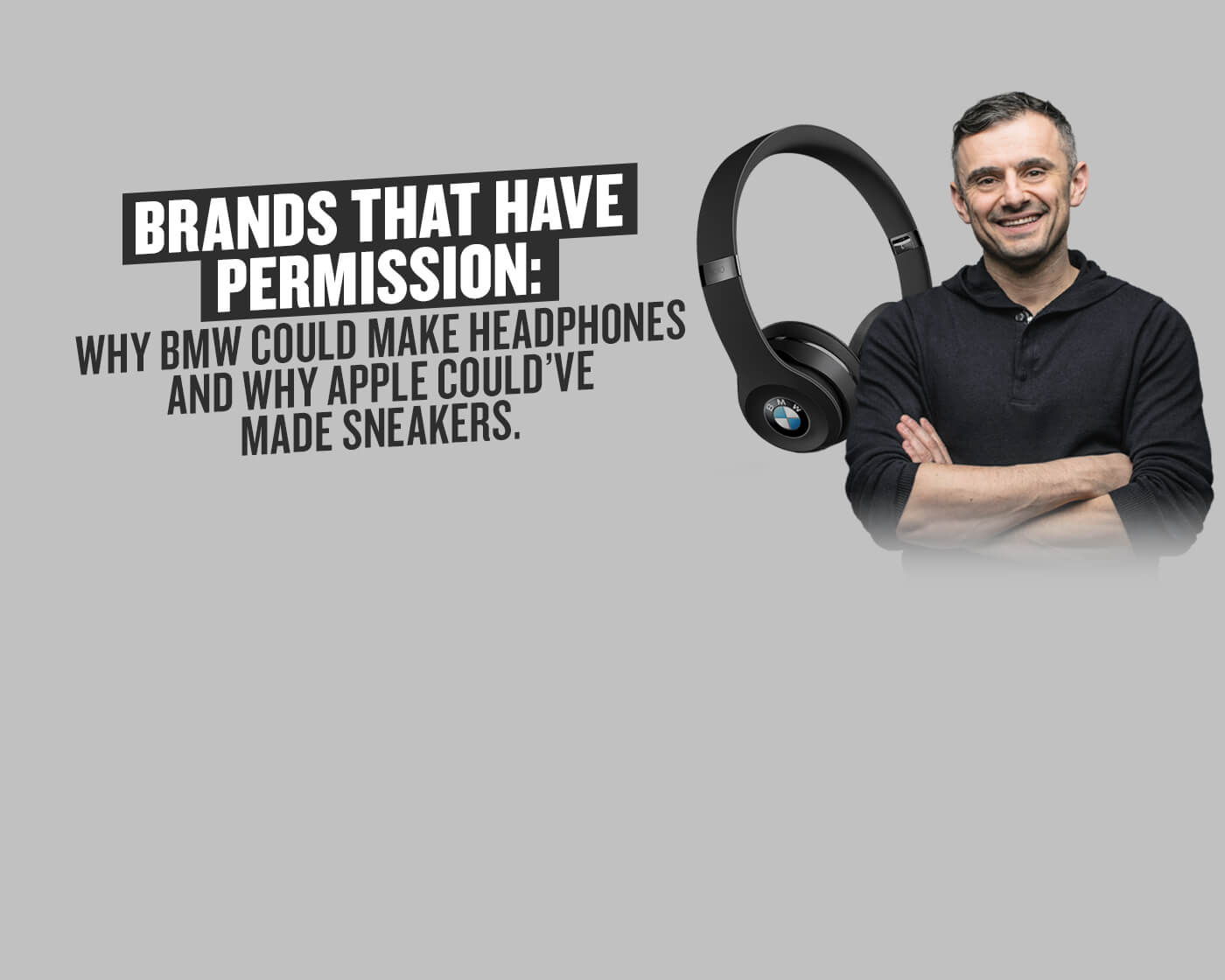 Brands that Have Permission: What if BMW Made Headphones and Apple Launched a Sneaker?

When I look at an established business strategically for the first time, I try to think of ways they could deploy their IP or brand in a different category.

For example, the reason I have a signature sneaker with K-Swiss (even though I’m a businessman, not an athlete or a rapper) and the reason many companies have permission to enter different categories comes down to one thing:

Brand gives you permission to not have to stick to one product category.

Nintendo started off as a playing card company.

A lot of people don’t know this, but Nintendo started out creating playing cards. They launched in the late 1800s as a company that made card decks.

Over time, they experimented with different products in different categories until they eventually started selling toys. Then entertainment. Then electronic video games.

Today, they’re an iconic video game company, but they didn’t start out in that singular space.

No one thought that Sony could be a video game company, until they were.

Sony’s another great example. They started out as an electronics shop making tape recorders and radios.

Eventually, the reputation they built for production quality in that space allowed them to move into building the PlayStation and becoming a major player in the world of video games.

A similar thing happened with Microsoft and the Xbox.

What if BMW made high end headphones? What if Mercedes made an Amazon Alexa competitor?

Brands like BMW, Porsche, and Mercedes have built up such a huge reputations around their names that they have permission to move into a ton of different sectors. They’re all luxury brands known for engineering and quality, so they can attack different categories through that “lens.”

For example, if I were the CEO of Mercedes, I would’ve considered making a competitor to Amazon Alexa a couple of years ago. Mercedes has permission because of their reputation around engineering high quality products, and they could’ve potentially leveraged their brand to create the next big voice device that people had in their homes.

Same thing with BMW. They could compete with headphone brand like Bose or Beats and enter a completely different market. If they leveraged their reputation for engineering to make headphones that worked better than anything else on the market, people would take their product very seriously.

What if Nike competed with Gatorade?

A big reason to enter a new product category is to service your current demographic in a different way.

For most people, it’s athletics, sports, or training. That reputation gives them permission to potentially come out with workout drinks and compete with brands like Gatorade.

What if Apple launched a sneaker and competed with Nike and Adidas?

Another great example is Apple.

I think if they made sneakers a few years ago, I believe they could’ve completely crushed.

Apple is a cool brand that has penetrated culture with the iPhone and Mac. It’s almost like a status symbol to have one. I think that reputation allows them to penetrate the sneaker market as well, from a design and technology standpoint.

For example, a few years ago, Nike came out with “Back to the Future” themed sneakers that laced themselves. In 2019, they’re going on sale to the public.

I think if Apple had come out with something like that (i.e. a well-designed shoe that laced itself), it would’ve been a total gamechanger. People would’ve been stunned and more importantly, they’d be thinking of how Apple was going to innovate next.

What if the New York Times started the greatest marketing agency in the world?

The New York Times has built a brand around being a major media and publication company.  That kind of infrastructure and reputation could translate really well to building an agency that serves big clients that want to do something similar.

More brands should ask themselves, “why not?”

If you build a strong brand, you have an incredible range options when it comes to innovating in various product categories.

Most people see Nike as a shoe and clothing manufacturer. I see them as a brand that could serve athletes with everything from shoes to clothing to sports drinks and more.

People used to see Sony as an electronics company, but they used electronics to expand into different areas like music, video games, and more.

Look at my own brand. I’m building a fast growing marketing agency, and I ran a liquor store before I entered this space.

This is one big game of “why not” and “what if.” Brands who ask those questions will innovate much faster than those who don’t.