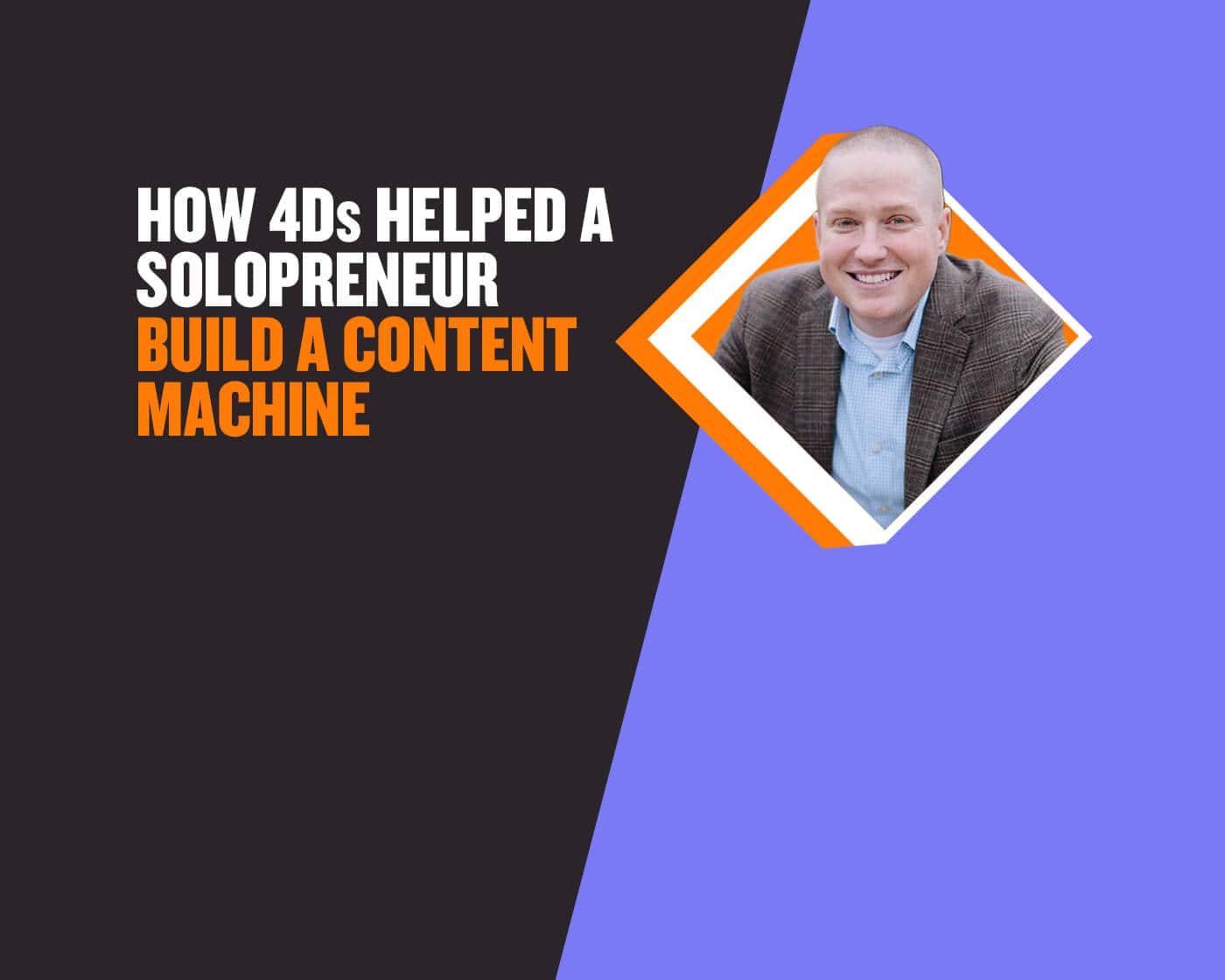 As the CEO of VaynerMedia, it has been an enormous goal of mine to share our expertise and the stories of companies and entrepreneurs we have helped – from seasoned veterans to those just starting up.

In 4Ds, we take attendees under the hood of VaynerMedia — both analyzing the work we do for some of the biggest brands in the world and showing how those tactics can help small to medium businesses.

After 4Ds, he built a more effective content machine that helped him land brand partnership opportunities, speaking gigs and more.

What did you expect from 4Ds coming in?

Personally, I had already been creating content before 4Ds. I had my podcast, books I had written and more.

I was trying to figure out the most efficient and effective way to create more content without adding more work to everything I’m currently doing. I just didn’t have time to spend creating content. But after listening to all of Gary’s material online, I knew how valuable it would be to put out more and build a content machine.

For me, 4Ds was about learning from Gary’s team about how to take one piece of content and turn it into multiple pieces of content in the best way possible. The questions I asked during the day mostly centered around that.

I wasn’t starting from scratch, I was already creating content for years, but I wanted to be able to do more of it.

What was the most impactful thing you learned?

What I’ve been able to do since 4Ds is build my team out more.

Since 4Ds I had a much better direction on who I was looking for and what pieces of the puzzle I was missing.

For example, my podcast production workflow completely changed afterwards. Now, when I put out an episode, it gets sent for transcriptions. Then my transcriptionist flags parts of the content I could use on other platforms like Instagram or Twitter.

It took a few months to get the system down, but 4Ds helped get me there faster and create more content than ever before.

Before 4Ds, I didn’t have the tools in place to build out the system. I was doing a podcast, but it was a miracle if anything happened on the back end of that. Now, we’re putting out 6 podcast episodes per week, two images going out daily with in-depth captions, and repurposing everything between Twitter, Instagram, and Facebook.

Learning from VaynerTalent was also really valuable for me. I asked them questions about how they build scalable content systems for other influencers.

Were there any “non-quantifiable” results that came from building your brand?

From a branding standpoint, I’ve been able to leverage my brand into a partnership with other companies. They wanted to team up with me to develop other products and services for them when they’re licensing my brand and name.

I’ve been able to build up a name for myself and they wanted to leverage that.

I’ve also been getting a lot of outreach for speaking opportunities and offers to give keynote talks. I gave my second keynote a couple of months ago, and I’m giving my first international talk soon.

A lot of opportunities seem to be opening up after I started putting out more content, both monetarily and non-monetarily.

Was there anything that surprised you about the program?

It was mainly how welcoming the team was and how much of a “family” it felt like.

From the moment I walked in, I felt like I was part of that family. People asked me to reach out if I ever need anything, had any questions, or anything else. There’s such a strong support community around 4Ds alumni. It’s incredibly supportive.

Whenever we happen to be in the same city, there’s always an open invitation to hang out and talk business.

What did you think of the team?

Everybody at Vayner seemed to be at the top of their field in terms of what they know and their expertise. It was amazing to learn from them and uncover the insights of what goes on under the hood at VaynerMedia.

Claude Silver (Chief Heart Officer of VaynerMedia) was phenomenal with her talk as well as DRock. It was motivating to hear everyone’s mission.

They also helped me understand the importance of culture. It was really valuable to get a sense for how Gary and the Vayner team audit their employees and learn what matters to them.

Before 4Ds, I was very much a solopreneur. After leaving 4Ds, I have two employees and other contractors, so understanding Vayner’s culture was very helpful. It helped inform how I should build my own team and content machine.