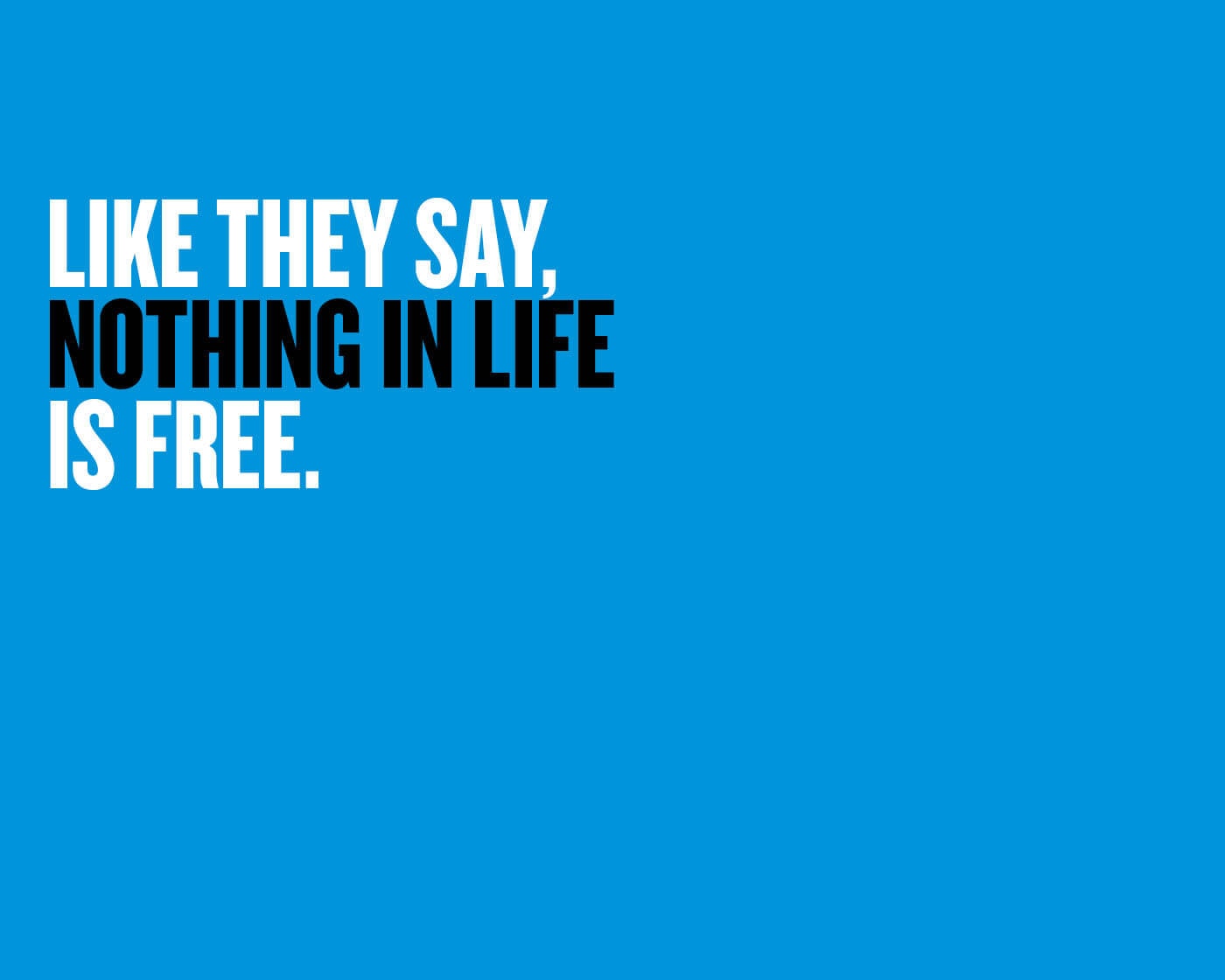 Never ever do something you can’t afford financially or emotionally.

That being said, some make emotional decisions over the idea of “free work.”

As they say, “nothing in life is free.”

People treat this as a privilege issue but I think it’s an opportunity issue. Many can afford it but aren’t taking the risk because they don’t value the exposure, relationships, learnings and I respect that if that’s one’s opinion.

Obviously sustained free work is impossible and the length is predicated not only on one’s savings but also their side hustle, how they spend their money to live, if they’ve made money before, if they have to help their parents, or a number of other things.

An increasing amount of skills that are wanted in the real world don’t require a college degree, nor has the curriculum caught up to the actual needs of the marketplace.

And for many, the opportunity to work closely with others who have succeeded in the industries that they are most interested in, or even better – and this is really where I’m going with this hypothesis – if you’re able to get to the top 100 people in your desired craft or industry and that requires an unpaid free consultation, an unpaid 2 month internship, a 4-month project, or 2 videos to be made for that person, then this is something you have to highly debate.

This is “your foot in the door.”

People make the debate that you should “know your worth” and that the person may be taking advantage of you – I just don’t see that because A) you don’t have to do free work, so somebody else can if they choose to, and B) in the course of my career, I’ve seen an uncomfortable amount of people go on to achieve big successes in their fields.

When I ask them how they got started, many started with extremely humble starting points producing for / creating for / bringing value to someone who was at the top of that game at the time. That could be an unpaid or very low paying internship, starting their own company for consulting and giving that person a creative project project for free (because that person’s logo or name brought value for them to build their business on), or something else.

The reality is, life is not binary. Why are we in a culture where it’s perfectly fine to go into ~$50,000 in debt for a diploma that brings no value and then go into the ecosystem and struggle to find a job – yet the idea of working for Anna Wintour, producing content for free for her Instagram while at 7pm to midnight flipping thrift store buys or working at a restaurant, living in a studio apartment with 2 friends, and using that opportunity to get into the fashion industry (if that’s your passion) is demonized?

That is a much more specific and subtle execution of “free” but an important one because a lot of people are closed out to it – because just like how they think I’m saying “free all the time”, they’re saying “never never never.”

This is my definition of free work.

When I think back to Wine Library, in the first few years of trying to build a presence locally, I would give my services to go people’s homes. Somebody would come in and buy a nice bottle of wine – and not only would I offer to host a wine dinner for them that had 5-10 of their neighborhood friends, I also offered to bring the wine for free because I felt that I would meet ~6-7 couples who had been shopping somewhere else who would then consider Wine Library.

When I started VaynerMedia, I didn’t have money (because I didn’t pay myself much when I was building Wine Library) — that’s why the company’s first location was in a conference room in Buddy Media’s office.

Many of the clients we got at first were paying us very minimal fees. We also did several projects basically for free – aka I would spend 3, 4, 5 hours of my time in a conference room strategizing and ideating for companies on how to create their social media strategy. I did that for countless companies, I also flew to many company offsites (on my dime) and gave speeches on where social media was going.

So not only was I not paid, I lost money, But I knew the awarenesses I would get from the audience and the words coming out of my mouth could and would lead to business development.

To this day, with the leverage we have and awareness we have at Vayner, I still will strategically give a speech or do a consultation for free on my dime. I literally did it a the Tuesday after Labor Day this year – on my dime – I spoke to a group of very senior executives.

A lot of people take a very emotional POV on this. I’ve spent my life paying tens of thousands of employees – at this point, it’s not about not wanting to pay, it’s about creating a conversation where people can be a little bit more strategic about understanding what value do they have to bring and how can they monetize it in a better way? We herald Beyonce when she trades her concert for Uber stock which became far more valuable than she would’ve been paid there.

I genuinely believe that the binary transaction of “work for cash” is ideological. I believe that there are many other things going on, and the social currency / awareness / learnings / opportunities are very real. There’s also the ability to redefine yourself, the ability to prove to somebody you can do something, the ability the work for a week to make friends with people who could become your best friends, potential spouses, mentors, co-founders, etc. This binary thought of “never work for free” is crazy – trading your services for something in return happened long before currency hit the system.

When I say work for somebody you admire or someone at the top of the craft for free, I’m not saying “let Beyonce take advantage of you” or “let Joe the CEO take advantage of you”, I’m saying I genuinely believe you’re going to extract more value out of Beyonce from working for her for free than getting paid $41,000 at an entry level job at a music company.

Strategic free work is being self-aware enough to know why you’re doing it. You know that you want to be in the architecture industry, music industry, or media industry, and you know have something of value to bring (like understanding and executing on TikTok, for example), and you offer Tiktok content creation for the leading architects in the world.

Free work is also about putting yourself in the best position to succeed. Let’s say you want to be in the football business – and that you’re a content creator for Tom Brady. But your hope is that it will lead to some other opportunity in the industry down the road. After a while, you realize that it’s not going to happen – you don’t feel like you’re getting “value in return” because you’re not being introduced to others, not learning much, etc.

Good news is, you’re in control.

Literally a week later if you feel like the Tom Brady job isn’t going to lead to the opportunity you thought, you’re in control to leave. You’re also in control to persevere for another month and stay until everyone’s more comfortable and the kimono potentially opens up.

You’re in control. You’re in control of even considering this as a thesis – just like the people who are adamant that I’m a bad guy or that this bad advice. I’m empathetic to them. But I’m no more “right” than they are. For the individuals that read this article, you get to decide.

The demonization of free work or spec work is fine, it’s just something that I know thousands of people have used to become uncomfortably successful. And those are just the people I know of – which means many many more have.

People say that the ones who can do free work are privileged – I argue that the ones who fight against it are privileged and don’t realize how many people would just like a foot in the door. Those people who fight against it don’t realize how many people can never get a shot, and the aggressive, creative idea of “I’ll show you” is exactly how people who wouldn’t have had a shot actually started the process of getting the shot.