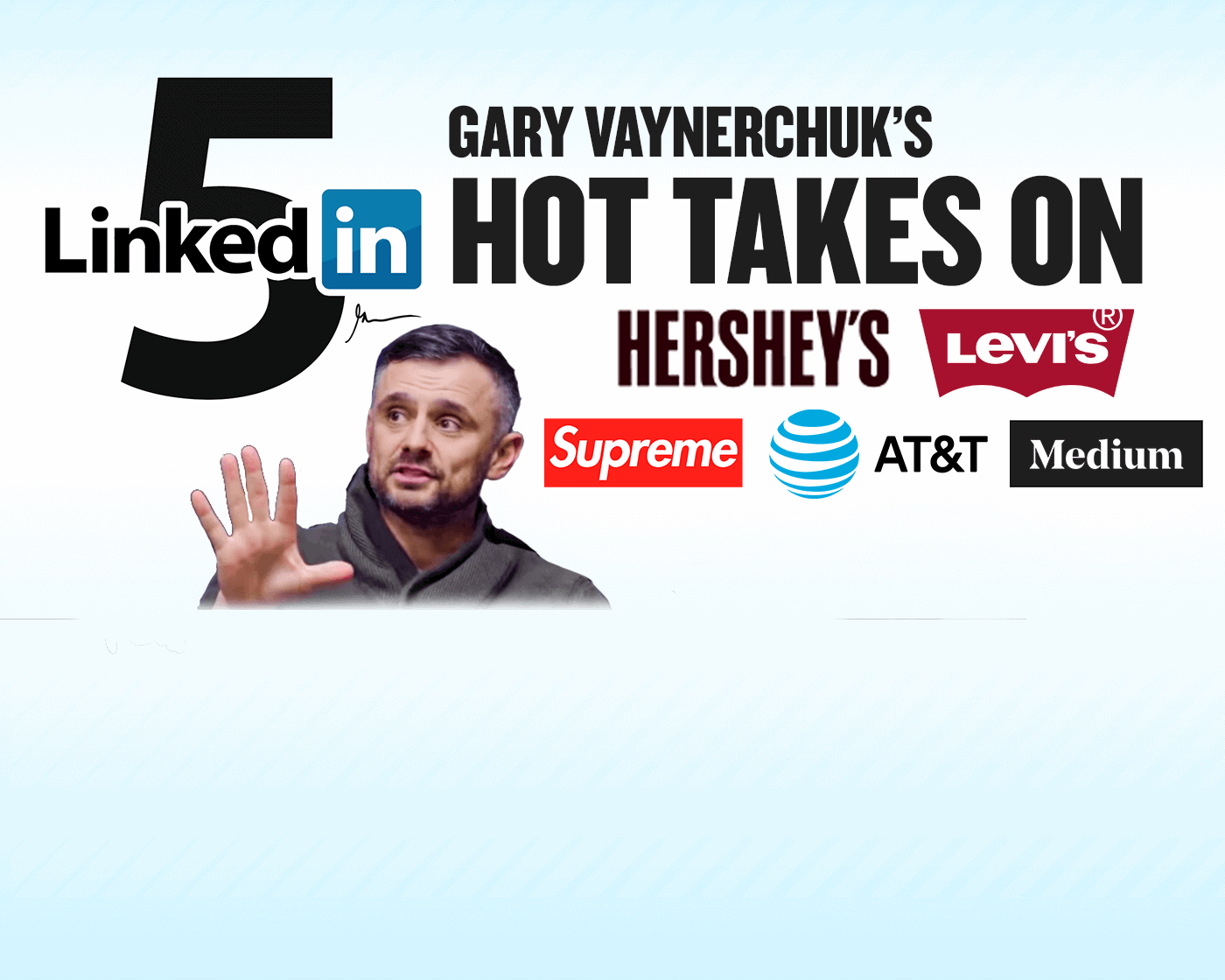 Hope you enjoy the second edition of “LinkedIn 5” !!

For those of you who missed the last one … a while ago, I came up with this new content format:

“LinkedIn 5” will be a bunch of quick, deep business hot-takes on what I see in the corporate world, marketing opportunities, new product categories that companies can get into, and more. Not saying I’m 100% “right” about everything I share – just passionate about sharing my POVs and perspectives. Hope you guys like it and get value from it!

In this one I talk about some opportunities and points of views on Hershey’s, Levi’s, Supreme, AT&T, and Medium –

Hershey’s could get into meaningful chocolate extensions

A few couple of thoughts on Hershey’s…

When you hear Hershey’s you hear chocolate.

So whether it’s direct to consumer chocolate shakes, protein shakes, smoothies, or other products, I would focus on line extensions where their chocolate-focused brand has “permission” to go. I also would probably create a super premium chocolate bar like a ~$25-$30 Hershey’s bar that elevates the brand, which could create sales and also make their core products feel like a good deal in comparison.

What I think Levi’s should consider, as an iconic brand with denim, is to be a pioneer on what’s next.

Levi’s feels like the brand that can really win the first “smart pants” game. I believe that the things we wear will eventually get “smart” – in other words, your pants will one day connect to your phone and tell you that you need to lose weight as they start to get tighter (for example). Your pants will be able to “talk” to you (some athletic wear brands already do this). As things like IoT and voice get more and more traction, I think that’s going that route will be a real business, and it’s Levi’s for the taking.

My hot take on Supreme

I think Supreme has achieved a level of status as a cool brand, but in my opinion they need to be a little careful to not extend its brand too much.

They’re a big business and so I have a lot of empathy for that, but in one man’s opinion, I would tighten that brand up and be thoughtful about where it’s extending. When you think about other brands that extend their brand to everything, it eventually gets to a point where it means nothing. I think Supreme did an incredible job of building and achieving that “cool” status in culture, and now they need to be very thoughtful to not overextend their brand to places that could potentially be create a decline in that status.

It’s less about “where” they should stick to – it’s just about being super thoughtful going forward about who they decide to do JVs with.

AT&T’s really a media company at a scale at this point – it’s a media conglomerate.

I think they need to find the best IP in the world and attach that to their distribution products, so I’m a little less versed in what I would actually do there – other than understanding the importance of IP. For example, looking at when Fox got The Simpsons, when they got NFL games, or realizing how important it is to have another “House of Cards”, etc. Networks are built a lot of times on IP. OTTs are now networks in theory, and doing a lot of thinking around what content they’re going to fill their pipes is important – hence why they did the Turner deal. But I think it needs to extend even further now they need franchises.

The positioning of the upcoming HBO Max to be more family friendly makes a ton of sense, in a world of competing with things like Disney Plus. We think about HBO we think high quality, more adult – and I think the HBO brand much like Hershey’s has a lot of opportunity to go and expand its wings.

I believe in Medium’s pay-for-content strategy

I should disclose first that I was an early investor in Medium.

They’ve gone with the “pay for content” model, which I’m a supporter of. I’ve found myself in the last 12 months clicking articles that I find on social, and then feel the desire to read them even though they’re behind paywalls. I haven’t paid for one yet, but last week there was an article that I really wanted to read, and I was close to paying. I thought that was an interesting chemical feeling that I was close to signing up for $9 / month, even though I didn’t have interest at that moment to read any other articles on that site.

I think Medium has that potential for sure – original, creative content would really play. Think of Medium like Sirius. If they get some original writers that only live in that environment, their subscription product can get really good. It comes down to casting.

I talk about putting out content for free but I also think anybody can charge for content if they’re good enough. However most people aren’t good enough from the start, which is why it can help to put free content and build leverage. For example – last time I checked, nobody on earth would pay to come watch me play basketball. Right? But there’s an entire league where people would. That’s how I think about content – a percentage of content creators today are not good enough to charge for their content directly, AKA the market doesn’t enjoy their content enough to pay for it.

But some are good enough, and I think there’s big business there in written / audio / video form and I think you’ll see that continue to play out over the next decade.