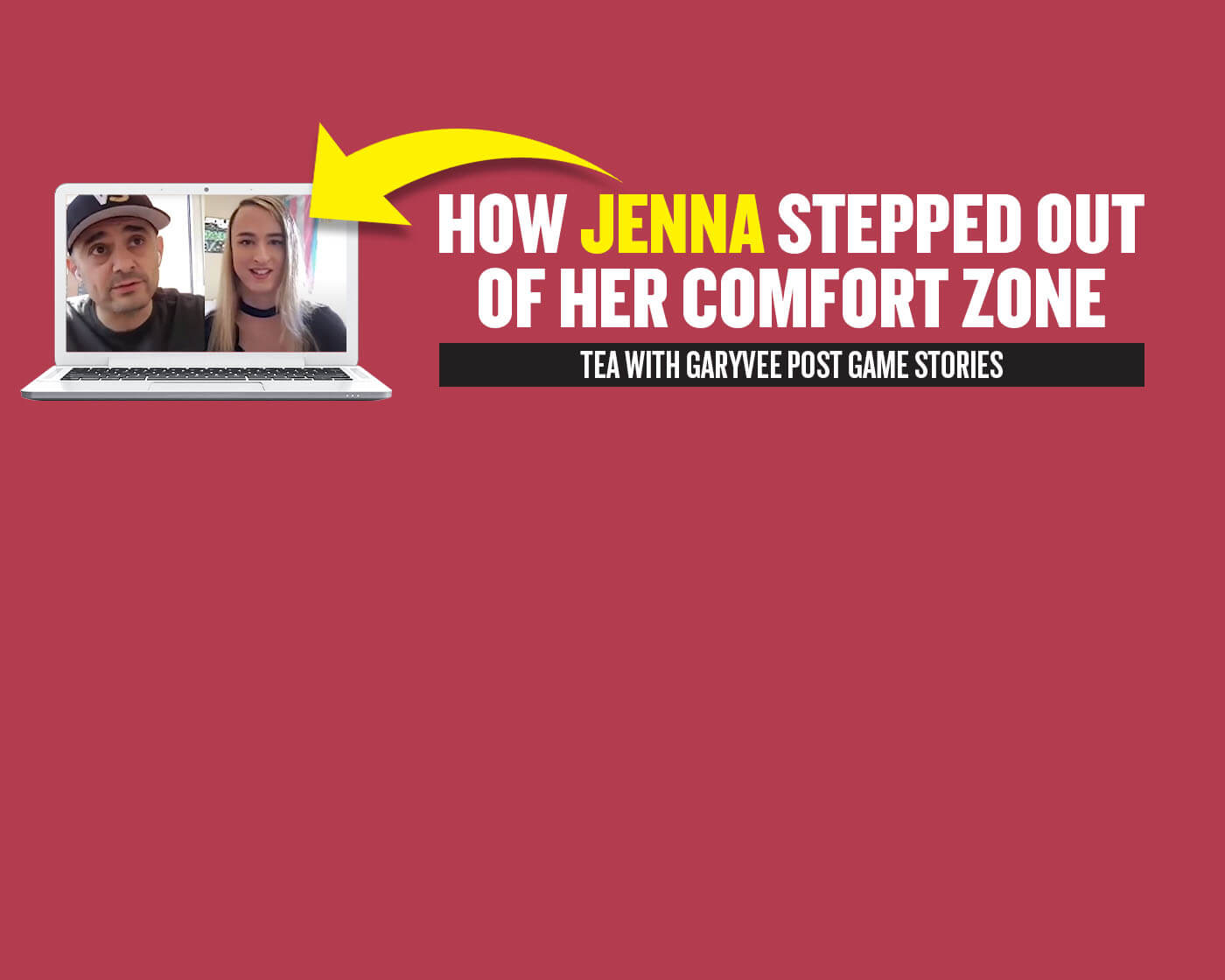 Post-Tea Interviews: How Jenna Stepped Out Of Her Comfort Zone After Tea With GaryVee

I’ve been spending a lot of time every morning doing live streams on Tea With GaryVee – hopefully bringing value to all of you as we get through this time!

So I asked my team to interview Jenna Malone, who was on Tea With GaryVee #4, about what she did after. Here’s our full conversation:

On the call, she asked about a few things:

Juggling different things at once and having multiple different interests…

How to balance her interest in art with her clothing business…

And the fear of spreading herself too thin by “not being an expert in one thing.”

I tried to really drive home a few things…

2. The answer’s “yes” to everything

And 3, Life’s about perspective.

A little while after she came on the show, Jenna sent me this email – and that’s when I asked the team to interview her and dig deeper:

“How’d you feel about your experience being on the show?”

I probably rewatched the video 50 times and completely judged myself. It was pretty harsh.

And Gary proved that when he told me to put up a drawing $80 and I kind of laughed. I didn’t think it was going to sell. But I put it up and it DID sell, so it made me realize this is an example of “what if it goes right?”

As far as my art, I didn’t really think that I could ever make it as an artist. I had so many people, like my parents, and just society’s narrative of “starving artists” convince me that it wasn’t a thing that I could do. That’s why I went back into trying to sell t-shirts because I thought maybe t-shirts would appeal to more people.

And the fact that I put that drawing up and it sold kind of showed me that you never know, you just got to do and then see what the results are. Because you never know what the outcome’s going to be.

“In terms of balancing different interests, how are you approaching that now? Still doing multiple things or focusing on one?”

I took a lot of the pressure off myself.

That’s something that I’m getting over. I’m actually doing more art now than ever, especially in this quarantine. I’m trying to get into doing custom shoes so I just bought a couple blank pairs of shoes and I’m going to paint them. And I bought some plywood, and I built a wall in my backyard, and I’m going to start spray painting it because I do graffiti.

As far as balancing things, I think it’s just about having to accept that I want to try different things right now. I have so many ideas that pop up in my head. I want to design a coloring book for adults, I’ve been wanting to do that for a while. And I’m going to pursue it! I may not get as many t-shirt sales because I’m not spending as much time on it, but I think I owe it to myself to try out these different things because I never know what’s going to happen.

As an artist, I can’t just restrict myself to one medium. That gets boring to me, so I want to try out different things and see what I like best, or see if I like doing them all. That’s kind of how I’m balancing it now.

I think talking to Gary helped that a lot because I feel like there’s such a narrative that you have to just pick one niche and go all out in that niche. The fact that Gary kind of told me that it’s okay to do different things, and that the answer is “yes.”

That really stuck with me.

“Talk to me about what you started doing on Twitter and what results you’ve already seen.”

It’s going well. I’m not doing it every day, I probably should. Time management is still something that I struggle with.

I did spend two hours on Twitter the following night, after that interview, and I gained a couple of followers. Someone sent me a message saying that they were interested in buying and so it kind of proved too that if I continue doing this, this could actually work.

And looking back on the interview, I feel so stupid for say that “I only tried it once” because you can’t just try something once and expect it to work. You gotta keep trying it for a while, at least, to see if this is going to work or not.

I think it’s just the fact that Twitter is just such a different platform. It’s not visual. I think I just had the mindset like, “well how is clothing going to sell on there?”

But it’s more than just the clothing, it’s about the message, what the clothing brand is about. And I think that Twitter’s definitely a great place for that because you could just type in a search term and find everyone who’s having a conversation about that word. You can engage with it.

“What are your plans going forward with everything?”

My goal is to step out of my comfort zone even more.

I had mentioned when talking to Gary about wanting to start a podcast, and just starting one is like completely out of my comfort zone. Again, I build up these thoughts in my mind like, “who am I to start a podcast?” “Who’s going to want to listen?” “No one’s going to listen.”  These are the things that are going through my mind, but you can’t think that way. I don’t know if people are going to listen until I actually start the podcast.

Last night, I actually had my first livestream and recorded the whole thing. I’m going to post that as an IGTV video and then I’m going to strip the audio and I’m going to make that the first podcast episode.

I also did a livestream with another business owner. It was great to get his perspective on the subject, on being underpaid (the name of my clothing line).

When it comes to stepping out of my comfort zone, I relate so much with Gary’s content about overthinking things. I haven’t been posting as much on TikTok because I’ve been overthinking it. I get this perception of like, “unless I’m dancing or doing something with music, no one’s going to want to watch it.”

But I still posted one video on my clothing brand TikTok, and it got 20,000 views. And then I posted another video and it got like nothing. You don’t really know it’s going to work and you don’t know what content people are going to really drive with until you actually do it.

“Where can people find you?”

Here are my social links: