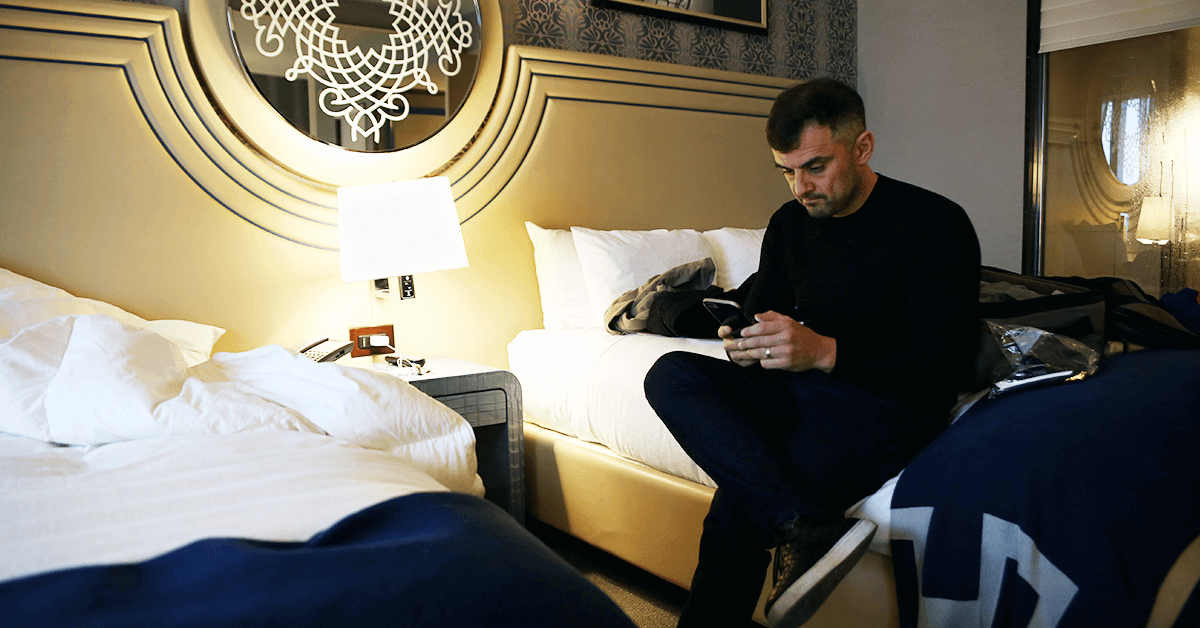 Deploying Against the Snap: Takeaways from Snapchatting in Vegas & CES

I spent all day Snapchatting in Vegas yesterday at CES, in my hotel room, during meetings and in between breaks.  I was storytelling and providing value to my followers on the ghost.

And the one simple takeaway is this: if you’re running a business in 2016, you need to be thinking about Snapchat as a channel to grow your customer base. Period.

Even six months ago, Snapchat was still too young. I said it myself on DailyVee today. But now it is time to take your Snapchat strategy, or lack thereof, very serious.

I hope you’ve seen On Snapping My Way Through Vegas where I go deep into my point of view on Snapchat. Now I want to break it down here, highlight some key points, and get into the importance of this amazing platform.

Here is why I care so much about Snapchat: because I haven’t seen this much consumer attention on one social platform since early 2007 and 2008 with Twitter.

Let’s think about how insane that is right now, especially in a time when email open rates are at best at 25%.

Everybody wants to talk about reach: the number of visitors, the number of hits, the number of views. But reach has nothing to do with actually selling shit. Someone seeing a pre-roll ad doesn’t mean they watched it; they probably skipped it to get to the thing that they really wanted to see. That’s why not only the time being spent on Snapchat but also the way it is being spent is so significant.

Snapchat is about to win the attention graph.

How to Approach a Snapchat Marketing Strategy

Brands need to value the importance of this app, and soon, before marketers ruin it (as they always do). Take a step back in 2016 and really think about how you are going to use your website, your email, your packaging, and whatever else you are focusing on, to drive a following on Snapchat. Then, in addition to that, you need have a creative strategy within Snapchat itself. The creative needs to be native to Snapchat, and native to their Stories feature. Because the platform has so many unique nuances, making sure your content looks native is crucial.

But this is where we run into a problem. The problem is that there is not a single company that is ready to allocate hundreds of thousands of dollars in creative just against a Snapchat Story, 365 days a year. If one brand went completely all in on production fees to become the best brand on Snapchat by putting out a compelling Story, that would be huge. A full Snapchat story, for me, means making at least 7 videos and 7 pictures every 24 hours of the day.

Growing a Snapchat Follower Base

While every brand is going to have a different follower growth strategy for the snap, a lot of brands will go for the low hanging fruit, things like contests or “follow us and you may win!”.

This is not the best way to attack growing your Snapchat account.

The right thing to do is this: make an incredible Story, download one part of it, and then upload it natively to other channels so people are seeing what they’re missing. If the content is good enough, it will compel them to go follow your snapchat username to see the rest.

Content is always king. We say it all the time in marketing, it’s so cliche, but the problem is most people aren’t following it. Most content just isn’t compelling. Instead of going for the cheap move, basically paying or incentivizing users to follow the account with a sweepstakes, I say go for the great quality content and use your other social presences to share that content and make people come and watch.

Yes, it’s true that I preach about always tailoring content to a specific platform. So uploading a Snapchat video to Twitter might feel kind of weird. But when you’re trying to build something up, there can be space to play. Build a follower base by cross platform promoting.

The big deal here is this: Snapchats are real personal moments. When someone sends you a Snap and you can reply in real time, within minutes of it, it’s extremely personal. These interactions remind me tremendously of how I built my brand on Twitter in 2007 and 2008.

Do yourself a favor and Google search “How to use Snapchat”. Allocate time to learn the platform. Get close to it. Learn the functions, the capabilities. Many of the behaviors and gestures you need on it, things like swiping up to get out of a page, will become more and more common as the platform becomes mainstream.

As you can see from my latest vlog, I’m a real practitioner, I’ve spent time on Snapchat and put in real work and energy to understand what it’s about and how to use it properly to build your brand or business.

See you guys on the snaps @garyvee