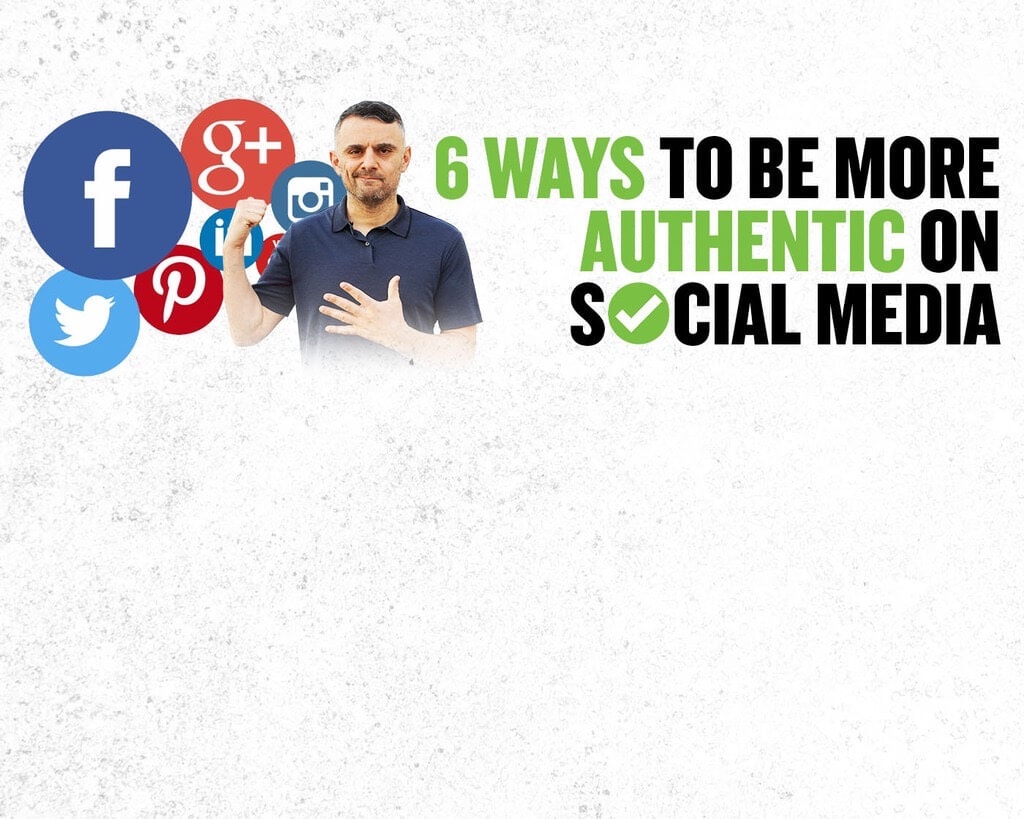 6 Ways To Be More Authentic On Social Media

Over the past five years, Gary has spoken, numerous times, about the ways content creators can balance their privacy and with delivering authentic content to their audience. We’ve compiled these tips to help you get out of your head and start focusing on your content!

“I think- human beings overthink shit. I think that is a fundamental problem. I think when we start coming from what’s authentic and what feels natural…the law I believe in, is that my mom and dad had sex and they created me–and I’m taking this DNA to the finish line. That’s the law I believe in.”

“[In terms of business content] you need to do more how-to [content]. I get the flex of having more followers…but if you want to keep your followers you have to give them value. Show and educate them … It can’t be about you. What you really, really need to do if you want people to follow you [is] show them.

But isn’t that fake? I want to be real and authentic, not put on a show.

“That’s great, don’t put on a show. Be authentic and real in categories you’re willing to be authentic and real in. What I think [many people] are missing here is, you don’t have to be in every conversation. There are people who don’t even do social media because [they say] ‘Gary, I don’t want my shit out there’ … Then don’t post it.

There’s subject matter that you don’t want to get involved [but] I never fear not being authentic because I’m always authentic. I just don’t go into convos where I feel like I don’t know what I’m talking about, or I just don’t want to share. I stay very narrow … and that’s it. [Look], any conversation you go into, you’re going to have judgement. But, if you come with good intent it all works out in the end.”

What if I’m trying to be authentic and put out content that aligns with my beliefs … and people use it against me?

“Then don’t get involved in things that could lead to that. Say things you believe in and stay in conversations you’re comfortable in. I don’t have healthcare conversations, I don’t talk about cryptocurrency [and] I studied sports cards for years before I started talking about it and putting out content. So, stay in what you know and say what you mean.

We’re going to live in a world where deepfake technology is so strong people won’t even believe in video. We’re going to have to have so much self love and compassion because people are chipping away and trying to divide [when] what we need to do is come together.

If you know who you are, and your kids know who you are, and your parents know who you are [then] who cares what sammypants1996 thinks? 95 percent [of people] do feel things when somebody says something bad about them, but it starts with not getting too high in reverse. What people don’t realize, about me, is that when people say nice things about me, I get shy. I’m aware that I have good stuff going on [but] I don’t need [the praise].  I don’t need the accolades. Which is why I’m not vulnerable to criticism.

I understand what my intent is. I understand that my Jersey-ness might be too crass for somebody, but I’m not going to change who I am because of the way [somebody] sees the world. I have respect for the way you see the world, have some for me?”

“I don’t think we, the people who put out the content get to judge what TMI is. The consumer judges what’s too much information. I’m a big believer in the market deciding and, I think, you learn what the market decides by listening to the market. You put out stuff and you see what they come back too. For example, for me, there’s a Vine that I put out where I’m shitting on a toilet — that might have been TMI for some people but I did it because I’m curious as to what TMI is for some people. It breaks down to two things: You decide, and then, the market decides.

[Are] people engaging with your stuff? There’s a lot of [people] putting out content many would deem as too TMI, but the market sure likes it and if the market likes it and it works for them then you have to live your life.

We’ve seen a time where people thought Elvis shaking his hips was too much information, but I would argue that’s tame compared to what Miley Cyrus did at the [2013] MTV Music Awards. I would say that’s tame compared to what XYZ is going to do six years from now on whatever Netflix live show is around. I think things evolve, the market evolves. I really think of this as nothing [is] in the middle. You decide and then the market decides.

You do you. There is nobody deciding besides you and the market.  There’s always this nice balance and if you’re fortunate and lucky [with] what you’re willing to put out [and] they’re willing to consume and agree with it, that’s the Mendoza Line we’re all looking for.”

5. Be Humble and Figure It Out As You Go.

“So many of the things I say are contradictions. I think of life and business as a bridge: if you pull very hard [at both] ego and humility, or I don’t care what anybody thinks and I care what everybody thinks, or big picture and [details].  I like pulling from both ends. That’s where, I think, the strength comes in. I love pulling in opposite directions.

If I’m giving advice … and things are coming from different angles that are contradictions, this is where you have to go within yourself and not listen to a “guru” because I’m not. Nor is anyone else.

It’s on you to figure it out. It depends on what you’re trying to accomplish. It’s the strategy, the will, the interest of the content producer to make this judgement call. Content is going to find it’s audience, it’s in your best interest not to overthink in either direction.

6. One More Thing About Humility.

“I’m humbled every day. Being an entrepreneur is humbling 24/7/365. Don’t get it twisted for all my bravado and all my ego, I live on humility because I’m losing every second there are problems. By the time I get off the stage I have 800 humbling moments in my phone; when you run big companies you’re humbled all the time. I love being humbled. I enjoy being humbled, that’s part of the process.”